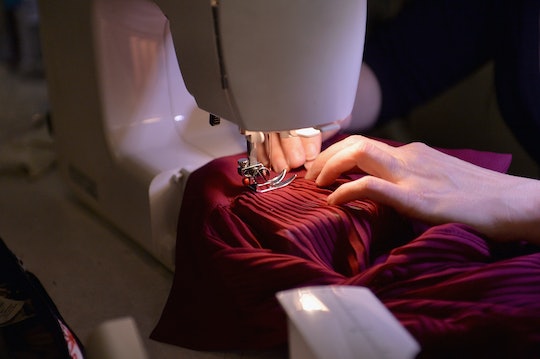 This Teen Made Her Own Prom Dress In One Night

It's finally happened, guys; Pretty In Pink is now a thing in real life. For those of you who are not so well-versed in all things Molly Ringwald, Pretty In Pink is a high school love story, one of those cool-indie-chick-loves-preppy-popular-guy and drama ensues kind of things. The best part of the movie is obviously when she makes her own prom dress out of stuff in her room like no big deal. And now a teen reportedly really made her own prom dress in one night. As a Pretty In Pink fan, I'm so happy I can barely contain myself.

Of course, things are different now. It's not the '80s, when the best you could hope for was a music montage as you crafted your dress. No, this is the 21st century, which means the entire process was live-tweeted. Also the dress is purple and is way better than Ringwald's pink concoction (even for the '80s, that dress was especially hideous). Shami Oshun, the 17-year-old teen from California behind the dress clearly knows what she's doing. Her prom dress was a thing of beauty, made with $15 worth of purple tulle hastily purchased at a local fabric store on Friday, the day before the prom, according to the Huffington Post. Then, the young seamstress got down to the business of making dress magic.

So what was it that had Oshun hastily buying a prom ticket at the last minute, you ask? She did it for love... the best kind of love. She told The Huffington Post:

My best friend really wanted to go and I didn’t want her to go alone.

So basically, Oshun is the best kind of friend someone could have; not only is she ready to drop everything to go to prom last minute to be with her best friend (when most people take months to prepare, according to Teen Vogue), she also knows how to whip up a frothy tulle concoction in no time.

Oshun, who has been sewing since she was 8, told The Huffington Post that she worked for about two hours on Friday night, and three or four more on Saturday. She said she loved the adrenaline rush of the time limit, and it paid off in spades. Her dress is legit nicer than just about any wedding dress I've ever seen, including my own.

Oshun is already a fashion designer who sells her handmade, custom-ordered clothing on her website, ShamiOshun.com. And yes, OK, maybe she had to cut off the gorgeous flower appliques at the bottom of her dress in the bathroom part way through prom because they were weighing her dress down. But she rolled with it, and checked the appliques in at coat check (as you do) so she could use them in future designs.

If this girl isn't working in fashion within the next few years, it will be a heartbreaking loss for everyone.