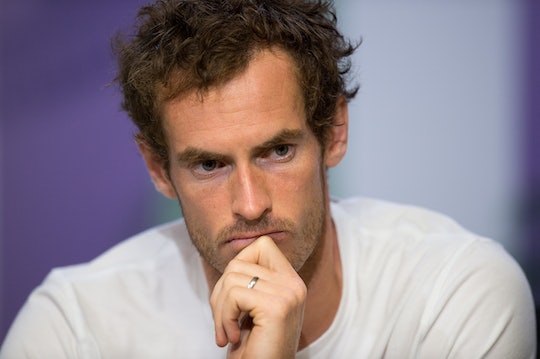 This Tennis Player Shut Down Casual Sexism Like A Champ

Everything sounds better with a British accent. Ordering a coffee, asking for directions, correcting a sexist reporter... actually, especially that last thing. When Andy Murray was being interviewed during a Wimbledon press conference, the tennis player shut down casual sexism with an even more casual, sizzling burn. Spoken from his perfect, beautiful face in his James Bond voice. You know.

Murray lost in the quarter-finals at Wimbledon to American tennis player Sam Queerey. He won last year, so I'm sure it probably felt like a bit of a letdown for him at first. Still, he ended up coming out on top, and not just because he's so talented and sporty either. During a post-game interview with several reporters, he quietly and politely stood up to rampant, casual sexism. (Ugh, so British, right?) When a reporter referred to Queerey as "the first U.S. player to reach a major semi-final since 2009," Murray quietly but firmly interrupted.

"Male player," he corrected, to a few light chuckles from the crowd.

The reporter, confused, replied, "I beg your pardon?"

Oh Captain, my Captain. You are too pure for words.

Several American tennis players have made it to the semi-finals since 2009; they just happen to be women. In fact, Venus Williams has already qualified for the semi-finals and is set to play against Johanna Konta on Thursday. This will be Williams' 10th time playing in the semi-finals. Her sister Serena Williams, currently not playing because she's expecting a baby, has played in 12 semi-finals. And not for nothing, it sort of feels like a sports reporter should know that.

Fortunately, there are men like Andy Murray out there to remind him. And the internet is eating it up, as it should.

And of course, my favorite; Murray's mom Judy tweeted this after her son's epic smack down:

This isn't even the first time Murray has called out a sexist sports reporter; During the 2016 Rio Olympics, BBC reporter John Inverdale said to Murray:

You're the first person to ever win two Olympic tennis gold medals; That's an extraordinary feat, isn't it?

To which Murray immediately replied:

I think Venus and Serena have won about four each...

All fawning aside, Murray's automatic smack-down when a female tennis player is being ignored (which also needs to end ASAP, by the way) should be the norm rather than the exception. But if there needs to be a man leading the pack in being a good ally for women, it might as well be Andy Murray, right?