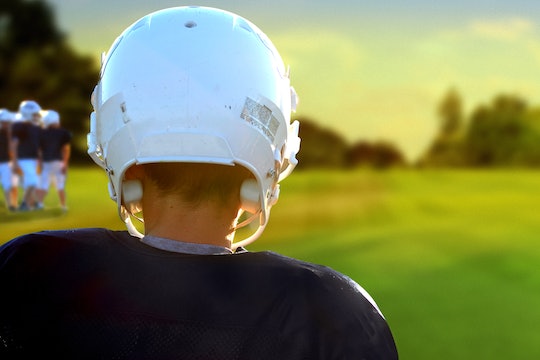 A simple saliva test may help physicians determine whether a child’s concussion symptoms will go away in a few days, or if they’ll face a longer, more complicated recovery, according to a new NPR report. Earlier this week, Penn State School of Medicine researchers published an analysis in JAMA Pediatrics of an experimental lab test aimed at predicting how long concussions symptoms in kids will last and their findings seem promising.

The saliva swab was nearly 90 percent accurate in predicting the children and teens whose concussion symptoms would last for a month or longer, according to NPR. By comparison, the survey-based concussion assessment tool most doctors use today was found to be only accurate around 70 percent of the time, according to the study.

Figuring out which kids will have long-term symptoms is an important issue when it comes to treating concussions. A concussion is a type of traumatic brain injury (TBI) caused by a blow or bump that causes the brain to bounce — or even twist — within the skull, according to the Centers for Disease Control and Prevention.

While those kinds of injuries are most often associated with professional sports, recent research has found that the rate of TBI and concussion in children is on the rise. In 2005, the rate of kids treated at the ER for TBI was at 23 out of 100,000, according to recent data from the CDC. But, by 2013, that figure had jumped up to 48 out of 100,000.

The Penn State research team estimated that of the 2.8 million traumatic brain injury-related ER visits, hospitalizations and deaths in the United States, as many as two-thirds happened in children and teens. Their objective in this study was to find a reliable, simple test that could help pinpoint patients who might face long-term challenges.

According to the CDC, the symptoms of concussion can range from headache and nausea, to vomiting, dizziness, problems balancing, double or blurry vision, sluggishness, confusion, memory problems, and difficulty concentrating. While most concussions aren’t life threatening, they can have serious consequences — especially if left untreated, or if the person has another TBI during their fragile period of recovery, the CDC noted.

In an interview with NPR, lead author and Penn State Hershey assistant professor of pediatrics Steven Hicks explained that when the brain tries to heal itself after a traumatic injury, it produces small amounts of genetic material called microRNAs. He and his team examined both survey and saliva test results from 50 concussion patients from 7 to 18 years of age and found that a few microRNAs were present only in patients whose symptoms lasted a month or longer, NPR reported. What’s more, the team found that at least one was a reliable marker for which children would have difficulties with memory or problem solving in particular, according to the report.

Hicks told NPR that the saliva test could help doctors and parents address one of the more complicated issues in properly assessing and treating traumatic brain injuries, explaining:

Parents often say that their biggest concern is, "When is my child going to be back to normal again?" And that's something we have a very difficult time predicting.

While most patients who suffer a concussion get better within a few days, as many as 25 percent “go on to have these prolonged headaches, fatigue, nausea, and those symptoms [that] can last sometimes one to four months,” Hicks told NPR. Speaking to CNN, he added that right now, there’s no accurate way of predicting which children could have longer or more complicated recovery from concussion symptoms.

It's frustrating for both parents and physicians that we can't accurately and objectively predict how long a child's concussion symptoms might last, what those symptoms are likely to consist of and when it might be safe for them to return to sports or school.

A simple, inexpensive, saliva-based test would also be helpful for finding and treating children who show few — or even no — symptoms but, could still be at risk for TBI (after a sports injury, fall, or other traumatic event), according to the CNN report. But sports injury experts told CNN that it’s still too early to tell if the test findings will hold for larger sample sizes, or offer meaningful results in adult patients.

For now, the CDC guidance for helping kids recover from concussion is to let your child’s symptoms be your guide. According to the organization, unless a child has a history of concussions or other neurological disorder, learning difficulties, or other stressors, most symptoms of concussion are likely to clear up with routine care. The best thing for parents to do is follow their medical provider’s advice and allow their child to make slow return to regular activity, while keeping an eye out for new symptoms or setbacks.