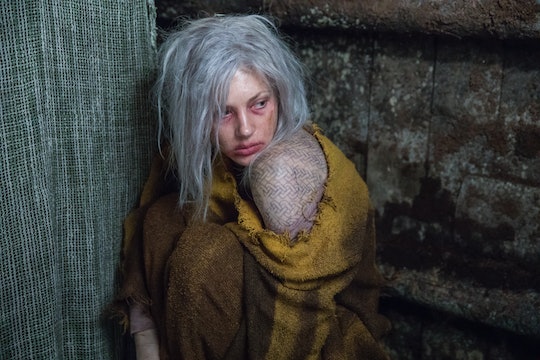 According To This 'Vikings' Theory, Lagertha's Death Is Imminent

Lagertha might have had it worse than anyone else on Vikings this season. She was forced to give up her reign over Kattegat, she lost her lover during battle, and now she’s back after having been missing for the past several episodes as a shell of her former self. As if things couldn't get any worse for her, this theory about Lagertha’s death on Vikings might mean an even sadder end for the shield maiden.

The theory points to Hvitserk, son of Ragnar, being the cause of Lagertha’s death. A Vikings fan on Reddit, Omar_Elattar, pointed out that earlier this season, the seer told Hvitserk, "You will accomplish what others before you have failed to accomplish." After so many people have tried and failed to kill Lagertha, it might be Hvitserk’s turn to get the job done. Although Bjorn, Lagertha’s son, is his half-brother, Hvitserk has a tighter allegiance to Ivar, who still wants Lagertha dead. It's possible that Hvitserk kills her out of loyalty to Ivar, especially since she’s now virtually defenseless.

Then again, another Redditor pointed out, Hvitserk could kill Lagertha, only to have Ivar kill him for taking away his own chance at revenge. I wouldn't put it past the ruthless king to pull that kind of move, but either way, it does make sense that Hvitserk might kill Lagertha before the end of the season.

Until now, Lagertha has been the picture of strength and leadership on the show, but as fans saw in the Jan. 16 episode "Baldur," she’s very different after coming back from the brink of death. I don't see her leaping into battle anytime soon, which could mean she’s more vulnerable to attacks now than ever before.

In her return episode, it was revealed that after the battle that took Heahmund from her, she was severely wounded and taken in by a healer. As she went in and out of consciousness and back and forth between life and death, Lagertha had a vision of Ragnar’s Season 4 death. Now, after bearing witness to another lover’s death in front of her, it seems like all of Lagertha’s pent up grief has come bubbling to the surface. She might be alive, but she might also never be the same again.

"We've always seen how incredibly strong she is and how she's gone through so many trials," Vikings creator Michael Hirst told TV Guide. "She was betrayed by Ragnar, she was abused by her next husband, she had to kill her best friend. But throughout all this, she seems not untouched by it but not unchanged by it. She's always remained strong and resilient and she's always kind of bounced back and I felt, and I think Katheryn [Winnick, who plays Lagertha] felt too, that these things eventually took their toll."

It’s hard to say where Lagertha goes from here. On the one hand, she might be able to finally come to terms with all of her grief over the years and come out stronger than before. There’s a chance that Heahmund’s death, though brutal, wasn't the turning point in permanently transforming her to the meek and seemingly lost version of herself in the latest episode.

Right now, though, she seems weak and changed. With Vikings Season 6 set to be the final season, this could be where Lagertha’s story ends. It’s not quite fitting for a warrior of her caliber, but after all she’s been through, it would make sense. She might even welcome death at this point. She’s dodged it plenty of times over the past few seasons, but as the theory suggests, it might be something she can no longer avoid.