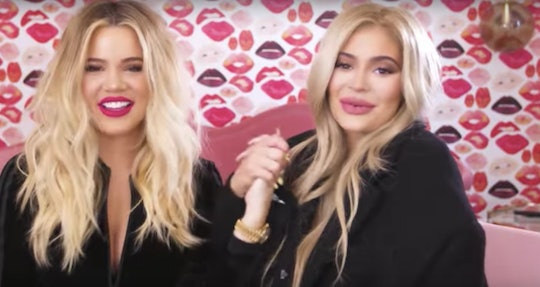 It's been two excruciating months since rumors began to float that both Khloé Kardashian and Kylie Jenner were reportedly pregnant with their first kids. Since then, fans have scoured social media and Kardashian family appearances looking for clues that the rumors are true or waiting for the family to confirm. But this theory about when Khloé and Kylie will address their pregnancy rumors makes so much more sense. Anyone who's been Keeping Up With The Kardashians all these years knows that the family saves the really big stuff for their show and on-camera one on ones.

It's more on brand for the family to confirm the pregnancies as a plotline on the show, since they've done that with scandals, too. This season's already dealt with Kendall Jenner's controversial Pepsi commercial from last spring — the model laid low during the scandal but then got real deep about it on some of the earlier episodes this season. So, this theory from TV Guide writer Sadie Gennis actually makes a whole lot of sense. It also means, if accurate, that fans will most likely get confirmation about the rumored pregnancies just before the holidays.

It's all about timing. Gennis puts together a pretty rough timeline for the announcements based on The Cut's Mariah Smith's genius recaps and timelines of when certain scenes were filmed in her column "Keeping Up With the Kontinuity Errors."

Gennis' theory is actually quite simple. So, right now, E! is about eight episodes into the latest Keeping Up With The Kardashians season. There's a holiday special on Nov. 26 and then three more episodes until the show breaks midseason, as Gennis explained. So far, only the first episode has a title, "Dog Tired," and a synopsis, which means the final two episodes are a total mystery. Gennis thinks that those two episodes will likely cover the pregnancy reveals (or rumors). Here's why.

So, if the rumors are true, both Khloé and Kylie are likely due around February, which means that they found out they were pregnant around June or July. The first episodes of this season began filming in March last year, according to Gennis' theory, but when it comes to the Kardashians and their show, events aren't always linear.

Like, take Kim Kardashian's reaction to claims that she wore black face in a photo shoot. Those images were released in June, but the episode in which she's reacting to them was filmed in August, as Smith explained in The Cut. While everything that they deal with on the show happens in IRL, they don't often handle it right when it's all happening. It's a TV show, after all.

Which means that the show likely won't depict the sisters finding out about their pregnancies and candid reactions right when they actually knew. But the family likely filmed a scene where each woman reveals the news to her family in late July or August or handles with the leaks in late September. If you've been watching, in KUWTK land this season, you know we're in somewhere around August at the moment.

It takes about four or five episodes to move about a month in time on the show, according to Gennis, so judging by the hints we have about their rumored pregnancies, the KUTWK filming schedule and timeline, it would make perfect sense to have documented the pregnancy reveals and air them as the midseason finale. They have to address them soon, since the show will be off-air during those alleged and estimated February due dates and there's likely no possible way that Kris Jenner is going to just let all those ratings and headlines go to waste.

As Gennis points out, if they reveal on the show during the midseason finale, that means the rest of the season will likely include Khloé and Kylie dishing about their pregnancies on some level. So really, the family's refusal to confirm or deny the reports right now is just a good way to build up the suspense for KUTWK.

All of this is just further proof that it's really the Kardashians' world and we're all just living in it.