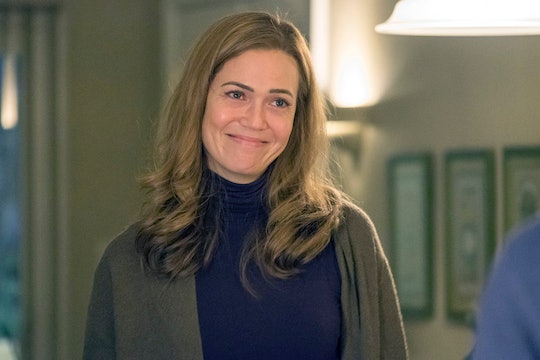 The first season of This Is Us introduced the Pearson family and centered around the mystery of where Jack was in present day. Season 2 slowly revealed how and when Jack died, but Season 3’s big mystery isn't about Jack anymore. This season, it’s about a mysterious "her" in the future. And this This Is Us theory about "her" could mean more tragedy, but not in the way you might think. The first inclination is to assume that there’s another mysterious death involving a Pearson family member. Heartbreak is the usual formula on This Is Us, after all. But one user on Reddit posted the theory that it could be Rebecca with Alzheimer’s instead of a female family member dead or dying.

Redditor thebuttblaster (ahem) wrote, "How sad would it be to make a storyline of Rebecca with Alzheimer’s and she forgets who Jack is and the children tell her stories of Jack." Short answer — it would be devastating, but knowing This Is Us, it wouldn't be all that surprising. After the Redditor posted their theory, other users piggybacked on it and agreed that this could be another twist that comes later in Season 3.

Another Redditor, its_your_mom, wrote, "This would actually make a lot of sense. It would explain all of the flashbacks from a storytelling perspective. (Every time we are seeing a flashback, it's a different family member visiting Rebecca and telling her stories about her life and family)." It would tie in all of the flashbacks thus far and make more sense once the series eventually comes to a close as well. But it doesn't mean it’s not also a tragic way for Rebecca’s story on This Is Us to end.

To assume that the "her" Randall and Toby speak of in the future scenes refers to another dead character could be a little too obvious, especially on a show where the twists and surprises are such a big thing. Sterling K. Brown, who plays Randall, gave a couple of hints to Entertainment Weekly about who "her" is on This Is Us and who she likely isn't. "It is someone that we have met over the first two seasons, so it won’t be something that comes out of nowhere," he revealed. "Dan [Fogelman, This Is Us creator] has already spoken to the fact that we’ve already shot parts of how he wants the series to end that’s dealing with that particular "her" as well. I think by about mid-season, maybe Episode 9 or so, the audience will know who that individual is."

This supports the theory that the "her" is Rebecca and that she has Alzheimer’s, especially since Brown said the "her" in question has to do with how the series ends. The show started off with Rebecca and Jack beginning a life together and starting a family, so it could end with Rebecca looking back on it all through moments of clarity and then dying. Are there onions in here?

So far, the only in-show clues we have to go on are that the woman in question is someone who Tess and Toby are both reluctant to see, though Randall eventually convinces the both of them. This doesn't rule out the "her" being Kate or even Beth. But Rebecca has touched all of their lives in some way, so it makes sense that family members would be reluctant to see her to say goodbye. It’s not the happiest possible ending for Rebecca when it’s all said and done, but if it means that she remembers Jack clearly before she dies, then it will have ended her story the best way possible.