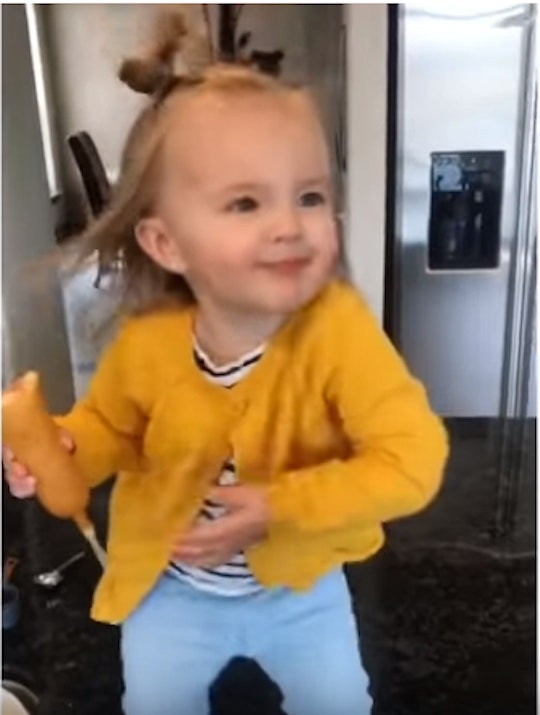 Sometimes the universe gives us something we wanted without us even knowing we wanted it. Like when I discovered Mayan hot chocolate with a pinch of cinnamon and cayenne pepper... who know I needed my hot chocolate to have a bit of a kick? Not I, that's for sure. Well the universe just delivered another sweet kick in the surprise box for us via the internet. Indeed, there's a video of a toddler dancing to Beyoncé complete with corn dog and yes, oh yes, a wind machine. I didn't know I was allowed to enjoy this many good things at once.

Brooke Mooney did the world a favor and shared a video of her absolute star of a daughter getting down to "Crazy In Love" by Queen Bey and JAY-Z, according to the Daily Mail. But Mooney's 2-year-old daughter Baylor didn't just do a cute little dance where everyone is like, Aw that's funny a toddler is dancing! No, this girl took it to the next level. She took it to Corn Dog Level 5, on account of she never once put down her corn dog during her routine.

Her mom uploaded the video on YouTube this past Sunday with the caption, "Our almost two-year-old little girl loves to dance, and after being inspired by another little girl dancing, we caught the most epic hair blowing, corn dog eating, Beyoncé dancing video!"

Now just get ready to have a great time, guys. Use Baylor Mooney as your inspiration and imagine you're also getting down to Bey and eating a corn dog with a wind machine blowing on you.

In the few days since the video was shared on YouTube, Facebook, and Twitter, it's been viewed millions of times across all platforms. Shows like Ellen and Good Morning America have featured the video, which you should know becomes more mesmerizing every time you watch it.

Mooney is sort of taken aback by the massive response to the video that she initially only shared with family and friends until they urged her to take it further. As the mom told WMC 5 News, "I never, never thought. I mean I didn’t have friends, or followers, if you would.

Mooney, who lives with her family in Reno, Nevada, told KOLO News Now that her daughter tends to really ham it up for the people she knows really well, and apparently for millions of us who just get to enjoy her sweet dance moves via the internet. She also noted to the news outlet that she, Baylor, and Baylor's brother Kash are always having dance parties in the kitchen. And just for proof, here's Kash getting down to "Uptown Funk" by Bruno Mars.

Talk about a talented family, right? Also I think I want to get invited over there for dinner sometime. A dance party in the kitchen complete with corn dogs and a wind machine? What else could you possibly need? I plan to use Baylor as my party inspiration from now until forever, and so should you.

More Like This
"Corn Kid" Handed Out Over 40,000 Cans Of Corn At A Food Bank Ahead Of Thanksgiving
Hero Who Tackled Colorado Gunman Was At Nightclub With Family To See Drag Show
Candace Cameron Bure's Response To "Traditional Marriage" Backlash Is Also Getting Dragged
No One Is Angrier About The Taylor Swift Ticket Disaster Than Moms