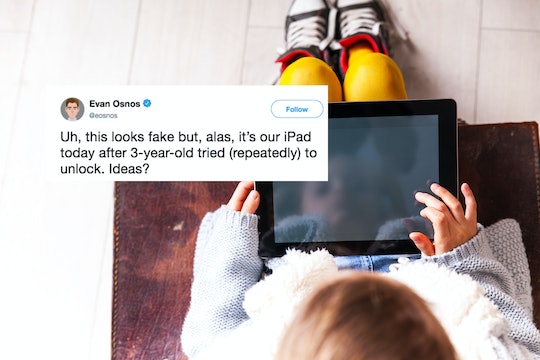 I think most parents would agree that iPads can be very useful for keeping your toddlers distracted while you get a little work done or you just need some down time. That little screen opens them up to a world of bright colors and games and characters they might never have known otherwise. But there's a flip side to that very convenient coin, my friends. A dark possibility some of us might never have considered before... but now that this toddler locked his dad's iPad for 48 years (ouch...), maybe we need to rethink this whole little fingers vs. technology thing.

Evan Osnos, a staff writer for The New Yorker, was caught seriously unaware recently when his 3-year-old son was trying to have a little fun on his iPad. You know, getting into the normal things that kids probably like watching their favorite television show or pulling up the "Baby Shark" video from YouTube and playing it on repeat. The regular stuff kids like.

Although we will apparently never know what Osnos' son was interested in doing on his dad's iPad, will we? Not unless we are prepared to wait 48 years and then let's face it, he'll probably have changed his mind about what he was doing.

Oh that's right. A 3-year-old little boy was able to lock his father out of his own iPad for nearly half a century, as Osnos shared on Twitter.

The bewildered dad shared a picture of his iPad screen reading, "iPad is disabled, try again in 25,536,442 minutes."

It seems his son was entering the wrong password over and over, as he explained in the tweet, "Uh, this looks fake but, alas, it’s our iPad today after 3-year-old tried (repeatedly) to unlock. Ideas?"

The internet is a fickle mistress. Sometimes the people are kind and helpful and sometimes they're snarling beasts. Fortunately for Osnos, he encountered the good folk of social media when he sent out a plea for help to unlock his iPad. Sure, not all of the answers were helpful, but they were kind of funny.

There were actually a few people who tried to help him solve his problem. Including that old "put it in a bag of rice" trick.

So what do you do if your toddler tries to break into your iPad repeatedly and ends up locking you out for 48 years? It seems there was a solution all along, and Osnos was kind enough to share it in an update.

As the relieved dad noted on Twitter: "Update on toddler-iPad-lock-out: Got it into DFU mode (don’t hold down the sleep/power button too long or you end up in recovery). Now restoring. Thanks to those who shared advice!"

Parents have been debating whether or not allowing their young kids to play with their iPads is bad for them for years, according to The Guardian, but I don't think anyone realized until now that their iPad fascination might make life more difficult for grown ups.

It really puts a different spin on things, doesn't it?