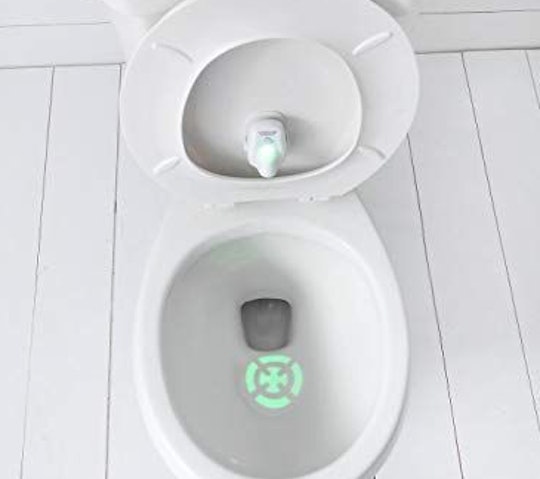 If Your Kid Could Use Some Help With His ~Aim~, You Need This Toilet Target

When I found out I was having a son, one of the many, many things I was told to look out for was pee. Pee everywhere. Everywhere. Now I’m not looking forward to that, but let’s just say I have thankfully(?) had a little practice with pee in the house thanks to my two beagles. People basically said potty training would be the literal worst, and that boys just can't get their aim right. Which is why this toddler toilet target bullseye by Toddler Target may be the most genius invention in the world of potty training — “designed to help your toddler with his aim game.” (And let’s be honest, this may be good for older people you live with, too.)

In all seriousness, the Toddler Target Potty Training Bullseye Light ($30, Amazon) is also good for children with special needs or on the autism spectrum, according to the product description on Amazon. The device appears to stick on the back of your toilet seat and the laser light aims down into the toilet bowl, making a target so there’s less splashing and missing of the bowl. You can adjust it so the target is directly in the back of the bowl as well, making it even more difficult to miss. Way better than throwing dry Cheerios into your toilet, right? There’s even an additional nightlight for those nighttime bathroom breaks in the dark

The reviews on this product are overwhelmingly positive. One happy mom of three boys wrote that her children (and her husband!) all love peeing on the target, and her husband likes using it at night without having to turn on the overhead light. (A plus that I probably would have never considered.) Another mom said, “I was tired of my bathroom smelling like urine all the time due to my 9-year-old son who had trouble focusing on the direction of his stream. I came across this product and figured I would give it a shot. Well, it’s been about three months and I am happy to announce that the bathroom is smelling fresh and clean!”

Another unexpected perk? Your kids may even ask to use the bathroom more often because it’s actually “fun” to do so. That may not sound like a perk, but if you’re trying to potty train quickly and efficiently, that’s actually a good thing. “Not only is it helpful to keep the seat clean, but my nephews are asking to use the bathroom a lot more frequently because it's so fun. That means less accidents and faster potty training,” wrote another satisfied customer with a clean-smelling, urine-free bathroom.

Plus, the customer service is apparently top notch with this company. “Larry” wrote in his updated Amazon review that he initially gave the product two stars because the batteries kept draining due to the motion sensor not working properly. The folks at Toddler Target saw his Amazon review and mailed him not one, but two new units and apologized for the inconvenience.

I think I know what my son will be "asking for” for his first birthday. When the time comes, hopefully this will help him “work on his aim game” and keep our bathroom from becoming sticky with urine. It's basically archery... with pee.