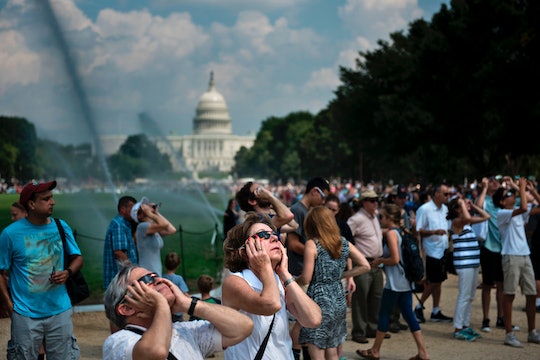 The Great American Solar Eclipse of 2017 has come and gone, and I have to say that I’m more than a little upset that this time has finally come. Sure, the known universe is filled with moments more than worth the cost of a telescope, but for millions of eclipse-obsessed watchers, this one was special. Not only was this an opportunity to see the first total eclipse in the United States in 38 years, but it was also the only chance in the next 99 years to experience it with people across 14 states. It was major. But, for those who might have missed out or had a less-than stellar experience this time around, there’s no need to worry. Eclipses (whether total or partial) aren’t all that uncommon. And an interactive tool can show exactly how many eclipses you can see in your lifetime if you missed this one, or simply can't wait for the next one to happen.

The good folks at The Washington Post used data on every solar eclipse between 1917 and 2117 to create an interactive globe that shows every eclipse on the planet for the next 100 years. They could have stopped there and the science nerds among their readership (myself included) would have been happy. But they kicked it up a notch and designed a graphic to re-calibrate based on the year the user was born.

The result is a very cool visual that shows exactly how many eclipses you can see before you die. I mean, assuming the user will live to a ripe old age, that is.

And we’re also assuming they have some interest in traveling. Eclipses might happen all the time, but they certainly don’t happen in the same location all the time. According to Space.com, it’s pretty common for our planet to have two partial solar eclipses in a calendar year, with some years seeing as many as five solar eclipses. Total eclipses — where the moon completely obscures the sun — happen less often, but still pretty regularly. In fact, total solar eclipses can be seen from some place on the Earth’s surface at least once every 18 months, according to Space.com.

As millions of people in the United States learned this week, the view of a total eclipse can change dramatically just by traveling a few hundred miles. But, to catch every opportunity to view a solar eclipse, one would have to be willing to travel a few thousand miles.

To test the graphic (and start planning my new career in eclipse-chasing), I used my birth year first: 1976. Not only was The Washington Post graphic sweet enough to remind me of how old I'll be this year (thanks for that, Jeff Bezos), but it also offered up some neat travel advice:

If you were born in 1976, you are (or will be) 41 this year. If you live to be 100, there will be 40 more total solar eclipses worldwide in your lifetime. Many will be over South America. One will only eclipse over water.

The next time, I used the birth year of the other science nerd in our household: My 6-year-old daughter. She has some 64 eclipse-watching opportunities to look forward to, according to the tool, many of which will happen in Asia and Africa.

Check out the super cool tool for yourself over The Washington Post.

It makes sense to feel a bit sad that months (or even years) of buildup is suddenly over. The mad scramble for a good viewing location, the right watch-party accessories, or even the last-minute crush to snag NASA-approved eyewear was oddly fun. With so many negatives happening right now, it was nice to look up (safely!) at the sky and get some much needed perspective on things.

Here’s hoping that the interactive graphic will help those of us who missed out this time — and those of us who are just bummed that it’s over — to get excited about life again. As for me, I’ve already marked my calendar for April 8, 2024, the next total solar eclipse visible in the United States. I’ve got a funny feeling that the Maine skies will be especially beautiful at that time of year.

More Like This
Meghan Markle Spent Her Thanksgiving Volunteering For A Cause Close To Her Heart
Over 10,000 Sippy Cups & Bottles For Toddlers Recalled Due To Lead Poisoning Hazard
14 Baby Names Inspired By 'The White Lotus' That Deserve A Round Of Aperol Spritzes
Patrick Mahomes & Brittany Matthews Welcome Baby #2