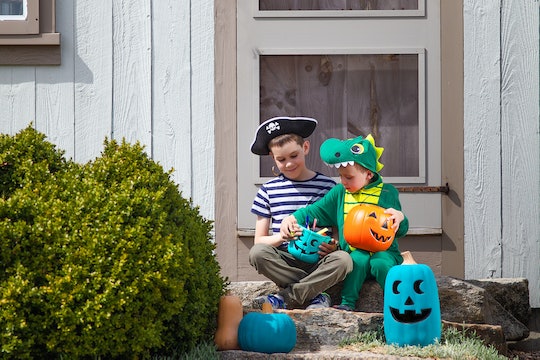 This Town Wants To Arrest Kids Older Than 12 For Trick-Or-Treating & OMG What?

If I could still go trick-or-treating without fear of a public flogging I probably would. I miss it, more than a grown woman should miss trick-or-treating. I want to climb into some costume I made with things I pull from my closet (usually an ambiguous pirate or fortune-teller because tall boots), grab a big pillow case, and get candy from my neighbors. I think it's one of the most delightful nights in our culture, and people should do it as long as they can. But this town is threatening to arrest older trick-or-treaters and, well, what?!

Romper has reached out to the city of Chesapeake but didn't hear back at the time of publication.

The police services in Chesapeake, Virginia are taking pretty extreme measures to try to prevent some Halloween mischief this year. The city's website has laid out specific rules of engagement for trick-or-treaters, and rather unusually they've also imposed an age limit. Going door to door to get candy (and probably a toothbrush and an apple from that one neighbor who always has to be a killjoy) is allowed between the hours of 6:00 pm to 8:00 pm and must be accompanied by an adult. Oh, and trick-or-treating is only open to children "12 years of age or younger."

What would the Sanderson sisters have to say about this, I ask you?

As if that's not bad enough, the city of Chesapeake would consider any person who doesn't comply with the rule of children 12 years and younger trick-or-treating a "Class 4 demeanor," which could actually result in jail time.

The city website put forth a reason for this incredibly strict rule that essentially forbids preteens and young adolescents from trick-or-treating: they simply assume they will be up to no good. The statement reads as follows:

Chesapeake Police staff will focus on making sure the evening is safe for everyone, not actively seeking out violations of the time or age limits. For example, a thirteen year old safely trick or treating with a younger sibling is not going to have any issues. That same child taking pumpkins from porches and smashing them in the street more likely will. Thank you for your help making it a fun night for everyone!

I'm sorry, but no. Why would the city of Chesapeake make an assumption that children of a certain age are simply up to no good, unless they happen to be taking a younger sibling out for the night? Do the people who made these rules not remember their own youth, when the best thing about Halloween was getting dressed up in your costume with your friends and stocking up on candy? Where is the harm in that?

As for the concept that threatening kids with jail time if they smash a pumpkin in the street... well, that's also a big no from me, my friends. I'm not saying that smashing a pumpkin and making a mess someone else will inevitably have to clean up is a good idea, mind you, and I believe it's certainly rude and thoughtless. But the possibility of a smashed pumpkin or two shouldn't negate all of the memories these kids should be making on Halloween. It's not just for little kids. It's for all kids.