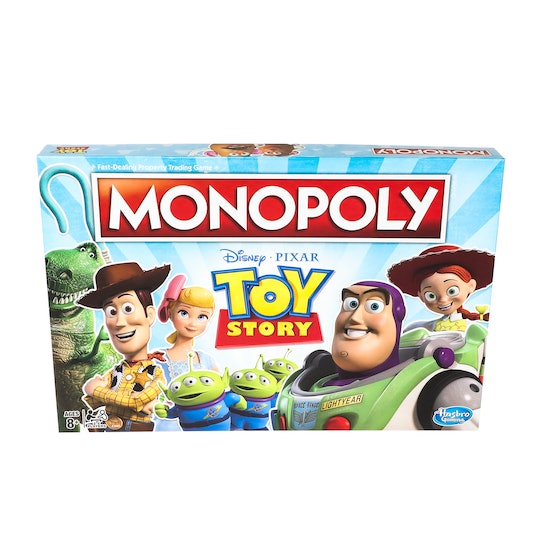 I am eagerly anticipating the release of Toy Story 4 this summer. Not because my kids are asking every other day when it's time for the movie to come out (although they are), but because I remember seeing the first two Toy Story movies in theaters as a kid and then the third in college, and I'm itching to see the latest installment of Buzz, Woody, and the gang and feel all of the feels right alongside my own children. In the meantime, we're going to play the new Monopoly: Toy Story Edition game every single day to get ourselves ready for the big screen return of the beloved Toy Story characters.

In the special edition board game, now available at Walmart, game-maker Hasbro has partnered with Disney to re-create the classic game of Monopoly using characters from Toy Story. Players can choose from beloved movie characters like Jessie, Rex, Bo Peep, and of course Woody and Buzz Lightyear, to serve as their game pieces. I definitely predict many arguments between siblings over who gets to play as Woody and Buzz, but I personally will be claiming the red-haired cowgirl Jessie as my go-to game piece.

Original Monopoly uses places like St. James Place and Pennsylvania Avenue to mark properties on the game board. In the Toy Story edition, properties for purchase are marked with locations made famous in the movies like Andy's bed, Pizza Planet, and Al's Toy Barn (definitely not where I want my toys to land!). In place of the community chest and chance cards from the original version of Monopoly, the Toy Story edition features "Andy's Toy Chest" and "Birthday Cards" for game players to draw from. The Monopoly money used in the Toy Story edition features treasured characters like Mr. and Mrs. Potato Head and Bullseye the horse, but the money also includes the newest member of the Toy Story crew, Forky, who will be introduced officially in Toy Story 4.

While most of the rules from the original Monopoly game still apply, the use of Toy Story characters and movie references creates a fantasy land where there is so much nostalgia wrapped up into a single board game that I almost cannot handle it. Toy Story fanatics will recognize Monopoly board references to "The Claw" from Pizza Planet where the lovable green aliens originate from, as well as a space where Sid, Andy's diabolical toy-disfiguring next door neighbor demands a tax be paid. These charming features turn playing a classic board game like Monopoly into an enchanting journey "to infinity and beyond."

As if an entire game of Monopoly designed to transport players into the world of Toy Story isn't enough of a thrill, Hasbro and Disney have also tamed up to release a Buzz Lightyear version of Operation. Because why play regular old Operation and pull boring butterflies out of a cartoon patient's stomach when you can choose to operate on the best space ranger in all of the galaxy? In the Buzz Lightyear version of Operation, players take turns fixing ailments on Buzz such as a lunar oil leak, squeaky solar socket, and damaged dashboard. Players who successfully remove the damaged part of Buzz get to keep that piece, and the player with the most pieces at the end of the game is the winner.

Queue up "You Got A Friend In Me" and get ready to stay obsessed with these Toy Story versions of classic board games for the next few months. This is one time where my kids and I will never have to argue over which game to play next, because honestly, the nostalgia factor here is enough for me to willingly play these two games over and over again to get ready for June 21 when Toy Story 4 finally arrives in theaters.

More Like This
Barbie Honors Aviator “Queen” Bessie Coleman In Their Inspiring Women Line
Are We All Stressed About Grocery Prices Right Now Or Is It Just Me?
A First Look At The New Hess Collectible That's Probably Definitely Going To Sell Out
The New Dad In Your Life Will Love These 20 Sweet Valentine's Day Gifts
What Parents Are Talking About — Delivered Straight To Your Inbox