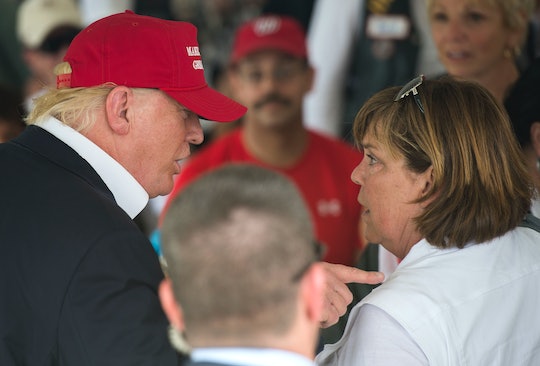 If Trump Is A Germaphobe, How Is He Anti-Vaccine?

President-elect Donald Trump held a press conference on Wednesday after months of dodging the press at every turn and relying heavily on his Twitter account to share information with the American people. He proudly discussed his recent deals with various car manufacturers, refused to share his tax returns, and called out the press for sharing what he alleges is "fake news" about his ties with Russia. Trump even made a joke alluding to an unverified report that he had asked prostitutes in Russia to urinate on him during a visit, saying "I'm a germaphobe." This tweet after Trump's press conference proves why moms are concerned about his presidency, because while he's busy deriding news reports and making jokes... some frightening decisions could potentially be made by his incoming administration.

On Tuesday, Trump met with noted vaccine skeptic Robert Kennedy Jr. to allegedly invite him to head a committee to investigate the safety of vaccines. While incoming White House Press Secretary Sean Spicer confirmed that the two men did meet at Trump Tower in New York City to discuss vaccines, another Trump spokesperson told Reuters, "no decisions have been made at this time," and that Trump is "exploring the possibility of forming a committee on autism." Kennedy has been vocal in his assertion that thimerosal, a mercury-based preservative found in vaccine, can cause ASD (Autism spectrum disorder), even though the myth has been widely debunked by scientific experts and doctors. (Kennedy is not himself a doctor.)

Kennedy spoke to reporters at Trump Tower on Tuesday, saying:

Trump has spoken out several times in the past, espousing the discredited belief that immunizing children causes autism. At a Republican debate in 2015, Trump claimed that he had seen a child get vaccinated and then become autistic:

Just the other day, two years old, two and a half years old, a child, a beautiful child went to have the vaccine, and came back, and a week later got a tremendous fever, got very, very sick, now is autistic.

So here is why parents should be worried about Trump's anti-vaccination ideology, and why it's incredibly ironic given the fact that he's called himself a "germaphobe." (It's worth noting that pee is sterile...) Anyways, first of all, scientists have proven again and again that there is simply no factual basis in the theory that vaccines cause ASD.

Second, if Trump's Cabinet moves towards opting out of vaccines, it would be disastrous for "herd immunity," children who are not yet eligible to be vaccinated against preventable diseases can become desperately ill. There could potentially be an outbreak of preventable contagious diseases like influenza, measles, mumps, rotavirus, and pneumococcal disease. And there have been recorded outbreaks as the result of people who received exemptions from immunizing their children.

The year is 2017. And mothers shouldn't have to worry about whether or not their child can become violently ill from a preventable disease. Not any longer.

President-elect Trump might think it's funny to make jokes about being a germaphobe... but maybe he should be more concerned with protecting children from disease than his own reputation.