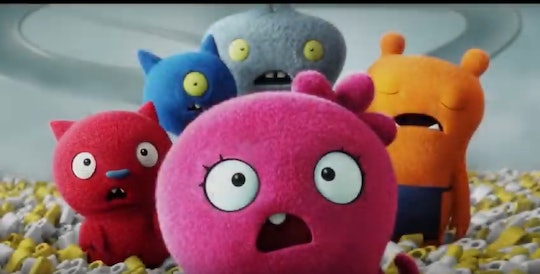 You & Your Kids Will Love Kelly Clarkson's Character In 'UglyDolls' — VIDEO

Man do I love a movie with a message I can really sink my teeth into. Especially when it's a movie for kids, because I think we can all agree kids tend to fully embrace movie messages far better than just us boring parents telling them things. And I think in our modern era, when so much of our lives are about the way we're seen and appearing perfect, a message reminding kids to embrace all that is imperfect in themselves is hugely important. Like this new movie, coming out soon. Really, this new UglyDolls trailer doesn't just look adorable, but it also gives us an inside peek at Kelly Clarkson's sweet character Moxy.

So here's the concept that has me so excited about this new movie — it tells the story of different dolls, those ones who didn't turn out perfectly and were then discarded instead of being allowed to realize their dream of making children happy. Sort of like The Island of Misfit Toys from Rudolph the Red-Nosed Reindeer, except in this case children will really get to meet the characters.

And one such character who isn't willing to give up on her dream of making a child happy is the aptly named Moxy, voiced by Kelly Clarkson.

Moxy lives alongside the other discarded dolls in Uglyville (run by the voice of Blake Shelton), but she really wants to hitch a ride to the town of Perfection, where everyone looks perfect and where she can maybe be sent away to live with a child.

I know what you're thinking, these names are a little on the nose, but that works well for kids — they sort of need things to be super obvious.

The new trailer for the film that's been categorized as a "jukebox musical comedy" by production company Troublemaker Studios was premiered by Clarkson herself on The Ellen DeGeneres Show on Thursday. And The Voice host admitted she sees a lot of herself in perfectly imperfect Moxy, as Entertainment Weekly reported.

According to Entertainment Weekly, Clarkson told DeGeneres: "Literally, I’m not acting. It just kind of evolved into me. She’s very positive; we’re very similar. I just didn’t want to act. I was like, ‘Can we make her like me?'"

This idea of being positive in the face of adversity, coupled with Clarkson's enthusiastic foray into acting, plus musical numbers that are sure to be incredible, it's basically a perfect cocktail for a kid's movie.

And let's not forget that Clarkson and Shelton are being joined by other voice actors like Nick Jonas, Pitbull, Janelle Monae, and veteran voice actor Wanda Sykes to name just a few.

I'm excited to see Kelly Clarkson dip her toe into voicing a character like Moxy, particularly since Clarkson has been such a fierce advocate for self love and acceptance. In the past she's been criticized every time her body happens to change, and she has no time for it. As she noted during a live performance of her song "Whole Lotta Woman," according to Billboard, "Happy looks different on everyone."

I hope she can and the rest of the cast can help spread this message to kids watching UglyDolls. Because it's seriously difficult to try retraining your brain once you become an adult.