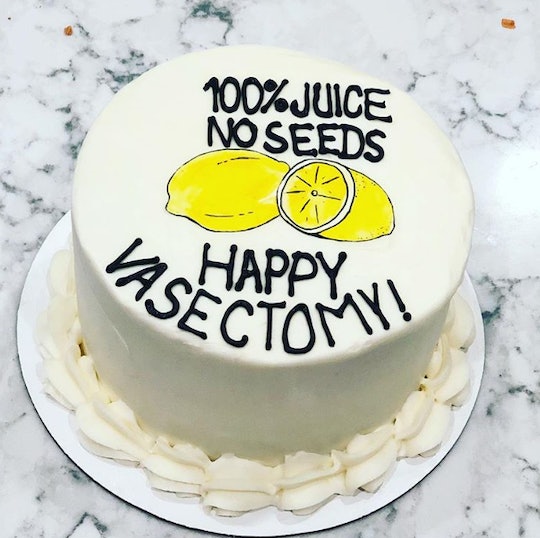 Vasectomy Cakes Are All The Rage For Newly-Snipped Dads

Do you remember back in the old days when we just celebrated birthdays, anniversaries, graduations, engagements... all the boring stuff? Well, not boring, per se, but just run of the mill, you know? Like how hard is it to have a birthday? I keep getting them and honestly I don't even try. Now that we're living in the future, some people are starting to revolt against the old ways. They're celebrating life changes that might actually be a bit difficult. Like vasectomies, for instance. Parents are all about this vasectomy cake and others like it, because while I've never had a vasectomy I hear they're rather life-altering and also why would we limit our cake-eating opportunities?

Signature Desserts, a bakery based in Nashville, Tennessee, recently shared a photo of one of its latest concoctions: A vasectomy cake. Because why should gender reveal cakes get all the fun? After all, a vasectomy is something to be celebrated in some families, particularly those who have decided they don't want any more gender reveal cakes, if you get my drift. But just because they're done with gender reveals doesn't mean they're done with cakes in general. Hence, this glorious cake celebrating a man's right to choose a vasectomy with a cake that read "100 percent juice, no seeds. Happy Vasectomy!" written with frosting. The only way anything should ever be written.

Owner and operator Nate Clingman tells Romper that this was Signature Desserts' first vasectomy cake, but they "loved the opportunity to do new fun and out of the box designs." Especially when the cake was so well received by the customer:

They LOVED it!!! Her husband thought it was the best and so funny!! My wife and I run this small little bakery as a side business in addition to our full-time jobs and our almost 2-year-old toddler and 3-month-old. We do it as a creative outlet as it is so much fun to be able to create such fun creations for all of our clients. Our favorite part is when we see the faces of our clients light up with joy!!

Perhaps some of you are thinking that it's not exactly physically difficult for a man to get a vasectomy, and you would be right. As the Nature noted, the procedure is an "effective and permanent method of male contraception." So why does it need to be celebrated with a cake? Because it's the end of an era for a man's little swimmers, which means it's the end of the baby era too. And that's something loads of parents will clearly be ready to celebrate when the time comes, because vasectomy cakes are definitely becoming a thing. Think amazing puns like "Snip, Snip Hooray," and now you know what to expect, as per Fatherly.

If you are thinking a cake isn't really enough, maybe you're right. Because back in 2017, a mom threw her husband a "Ball's Voyage" party and I think this needs to become the gold standard to which we hold ourselves as vasectomy-celebrators. Mom Kimberly D. Hemperly got her two kids "Swim Team Survivor" shirts, as well as getting her husband a whole plethora of vasectomy-themed goods. A shirt that read "Time To Retire The Swim Team," an assortment of penis-shaped snacks, a dinner of cocktail weiners and, naturally, a cake dedicated to the memory of his dearly departing sperm.

There's always a good reason to eat cake, and finally I think we can all agree that a man's vasectomy is just another one to add to the list. Why not celebrate the big life change ahead for both parents involved? Because once those swimmers have retired... it's a whole new beach, isn't it?