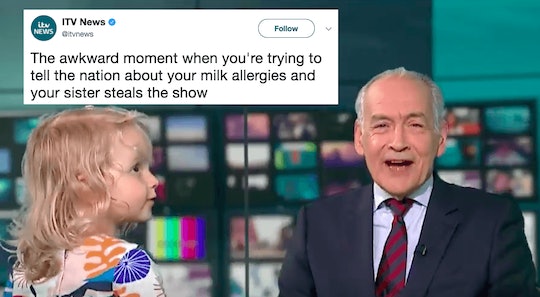 When newscaster Alistair Stewart sat down to deliver the ITV Lunchtime News on Wednesday, he probably wasn't expecting his biggest headline would be about his littlest guest, Iris. This video of a toddler taking over a news broadcast has gone viral on social media, and for good reason: It's the best example of how moms and even seasoned journalists just have to roll with the punches when it comes to toddler mayhem. Her mother, Lucy Wronka, appeared on the British afternoon news program to talk about her son George's milk allergy. Instead, it was little sister Iris who totally stole the show in the best way possible.

Wronka, an education policy specialist, and two children appeared on the news program to discuss new guidelines for testing babies for milk allergies. As Stewart questioned George about whether or not he missed having cow's milk, Iris decided it was time to explore the news studio. Stewart, a veteran journalist for the past 41 years, took the entire moment of toddler chaos in stride, telling Iris, "You just carry on there," as the toddler straight up climbed across his news desk on live television.

To her credit, Iris wasn't necessarily making noise or interrupting — she just didn't seem to understand that the ITV news studio was not, in fact, a toddler gym.

Both Wronka and Stewart were incredibly good sports about the entire segment: Neither the little girl's mother nor the broadcaster lost their temper on air, and couldn't resist just how damn adorable she looked running around the desk in her floral dress, tights, and bright red mary janes. Like seriously — it was cuteness overload. Wronka couldn't help but laugh and made no move to go after her daughter — that we could all be so chill, am I right?

Stewart also couldn't help but laugh as the segment wrapped, wishing a fellow newscaster, better luck when she appeared later that evening on the channel. " Mary Nightingale, I think, will have a more peaceful time at 6:30," Stewart mused, according to The Daily Mail. As the credits rolled, Stewart shook Lucy and George's hands, while giving Iris a hearty high five.

If this story seems familiar, you might be thinking of the viral BBC dad video from March, when Professor Robert Kelly got the news guest gig of a lifetime as his children wandered into his office during a live Skype broadcast on BBC World News. Moments later, Kelly's wife Jung-a Kim burst into the room swooping up their young children as Kelly tried to remain as undaunted as possible. So far, Kelly hasn't weighed in on the latest "toddler runs amok on the news" to take the internet by storm.

For Wronka, she seems to be taking their viral fame with good natured humor.

With so many bleak headlines as of late, watching a toddler cause adorable chaos in a news room is a much-needed, hilarious change of pace.