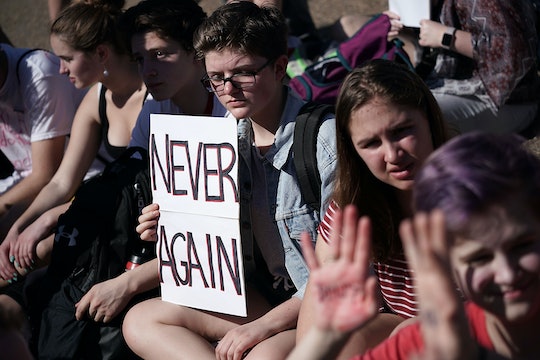 One month after the devastating shooting at Marjory Stoneman Douglas High School, the world looks a little different. Not as different as it should, I'll grant you, but change is coming. You can feel it in the air. Especially on Wednesday, when students across the country collectively walked out of their classrooms for 17 minutes, to remember the lives lost and to protest Congress' irresponsible handling of gun safety laws. And it wasn't just high school students; some of the youngest students were galvanized as well. If you want to feel inspired, watch this video of first graders singing during a school walkout. Because if this is what the future can look like, perhaps things might not be as bleak as they sometimes seem.

On National School Walkout Day on Wednesday more than 2,500 schools across the United States participated in a 17-minute walkout starting at 10 a.m., according to the event organizers, Women's March Empower. The internet has been inundated with images of high school students walking out en masse, some in silence and some carrying signs and calling out their desire for change. To see better gun safety laws, see their schools protected from the threat of another possible school shooting.

But it was the video of first grade students singing "Let Peace Begin With Me" as they participated in the school walkout which was, perhaps, the most effective of all.

Students who were participating in this protest were doing so to encourage Congress to implement three safety elements into gun law:

The organizers also want Congress to recognize "all forms of gun violence, including violence committed by police," and have two specific gun law policies they would like to oppose:

While some might see this rather sophisticated organized movement as something specifically meant for high school students, younger students got involved in National School Walkout Day as well. These first-graders from a school in Philadelphia didn't just get involved, they sang. Sitting in a circle in their warm coats and hats and mittens, lead in song by their teacher. They sang about peace, and about their own role in bringing about peace.

These children could grow up to be the next leaders of the country. The CEOs and Congress members, the senators and even presidents. And this is where their empathy begins to grow. It's being nurtured, right now, by a teacher who encouraged them to pay attention to the world around them. To consider someone else's pain, their fear, their grief. And to be present, even though it might be difficult for them.

To sing, even if it's cold outside.

Here's the thing; not to put too fine a point on it, but these children actually need to be able to grow up to become those empathetic leaders they most assuredly could be. They need us to protect them on their journey. The very least adults can do at this point, as children across the country take it upon themselves to make the difference adults have yet to make to protect them at school, is just that. Protect them. Take care of them. Make absolute damn sure that they never have to worry about some gunman walking into their school and opening fire on them. Making sure they spend their time learning math, learning literature, learning music... instead of learning how to hide in a closet in case of an active shooter situation.

Let's make sure peace really does begin with them, just as the song says.