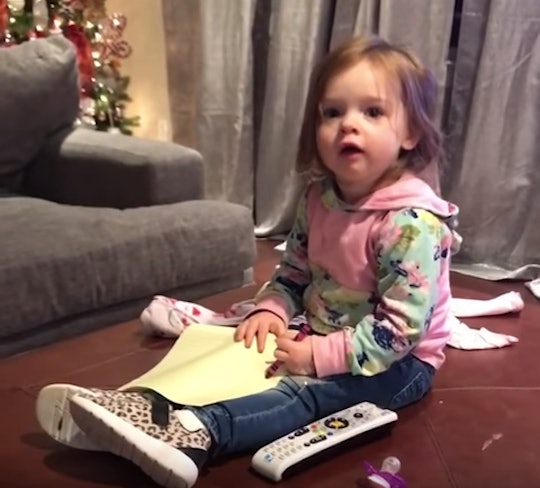 Maci Bookout's Daughter *Writing* Out Dad's Christmas List Is Everything

One of the toughest things to do as a parent is to teach your kid about generosity. Especially around Christmas, when kids naturally get caught up in all the presents they're hoping to get. All the toys, electronics, stuffies... I mean, there's a lot of options for a kid. You can't really blame them for going a little crazy. So if a parent out there manages to teach their kid to be thoughtful of other people at Christmas, it's worth mentioning. This video of Maci Bookout's daughter writing a Christmas list for her dad was adorable, and further proof that the Teen Mom OG star is maybe a much better parent than her critics are willing to admit.

Maci and her husband, Taylor McKinney, look to be raising their kids to be thoughtful of other people. Two-year-old Jayde was filmed in an adorable video Maci shared on YouTube, sitting on a coffee table (which I'm sure will somehow manage to get Maci in trouble) with her crayons, "writing" out her dad's Christmas list for Santa. She's so serious about it, and her older brother Bentley (Maci's 9-year-old son with ex Ryan Edwards) is even getting in on the action. He can be heard in the background of the video egging Jayde on, encouraging her to think about what she might want for Christmas.

In other words, these guys are just about the cutest family in the world.

Jayde is heard asking her dad what he wants for Christmas. When he tells her Taylor tells her he wants "a recliner," and "a million dollars," she very seriously puts crayon to paper. Of course, she's only two and can't write yet. But still, her heart's in the right place. When her dad falters, she even suggests he should ask for a football to help him out a little. As for her one-year-old brother Maverick; he's not quite been hit with the generosity stick just yet. He comes in wearing his hair in a little top knot, grabs his soother and beats a hasty retreat. Adorable, but not overly concerned with anyone's Christmas list. Probably not even his own. He'll catch up to his older siblings in the generosity department soon enough, I imagine.

Maci's kids appear to be happy and well adjusted, despite all of the bad press she has gotten in recent months. When the Teen Mom OG star made the painful decision to keep son Bentley away from his dad, Ryan Edwards, because of Ryan's reported drug use, fans were tough on her. Some noted that she had been filmed texting while driving, and that was somehow considered just as bad as doing drugs. And she's also been attacked on social media for drinking a beer in front of her kids with her then-fiance, Taylor. Because moms are held to a more rigorous parenting standard than dads, obviously.

Maci, like every other parent on the planet, is bound to make mistakes. Fortunately for the rest of the parents on the planet, they get to make their mistakes without having a camera crew following them and the entire internet waiting to bash them for everything they do. While ignoring all of the sweet moments of parenting.

This video is one of those sweet parenting moments. The whole family, hanging out and being a little silly together. Jayde writing out her dad's Christmas list with intense focus, clearly wanting him to get whatever he wants. Older brother Bentley reminding Jayde that she should ask for something as well.

This is what family is actually all about. Maci Bookout McKinney's family, or anyone else's.