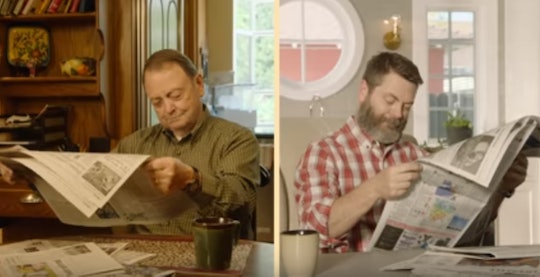 If you've ever wondered whether or not Nick Offerman is like his character Ron Swanson on Parks and Recreation, wonder no more. Of course he is, right? I mean, I'm not even sure he's an actor. I sort of assume he met Amy Poehler at Home Depot one day or something and then Ron Swanson happened. And I guess he comes by his Ron Swanson-ness naturally, based on this video of Nick Offerman and his dad, Ric Offerman, celebrating Father's Day. They're basically the same person, and that person is the one and only Ron Swanson.

For those of you who might not remember since we've had to suffer without Parks and Recreation for so long, Nick Offerman played Ron Swanson, the boss of the perpetually enthusiastic Leslie Knope (played by Amy Poehler). The amazingly well-written and engaging show ran for seven years, from 2008 to 2015, and one of the most-loved characters was the eternally woodsy, tough, manly-man Ron Swanson.

Always looking to cook a big steak or build a log cabin with his bare hands or not show any emotions beyond a quizzically raised eyebrow. And by the looks of this video featuring Nick Offerman and his dad Ric, the apple did not fall far from the tree. Which one of them probably chopped down in order to enjoy applewood smoked chicken from a smoker they built themselves.

The video is called My Tales Of Whiskey, and it's actually the third time in as many years father and son have gotten together to make a Father's Day video for Lagavulin.

In the 2018 installment, the two Offermans are each going about their day separately doing pretty much the same thing; drinking a cup of coffee in eerily similar robes, reading the newspaper, doing a few chores around the house, cooking a steak at the end of the day, and of course... drinking a whiskey. A dram of Lagavulin whisky specifically, it would seem.

"Happy Father's Day, dad. How's your day," Offerman says to his father over the phone toward the end of the video. "Thank you son," his pops replies. "It went well, worked around the house and ended with a Porterhouse steak, medium rare. And you?"

Although they can't quite agree on how to cook a steak (the younger Offerman opts for a medium-cooked steak), as Offerman said in a press release, they do agree that "nothing beats a dram of Lagavulin whisky at the end of a day filled with good work."

Of course, Ron Swanson would love this video. Swanson always remained true to his first love in the world of drinking spirits, Lagavulin whisky. As he said in one episode of Parks and Rec when asked how he dealt with a hangover:

Never been hungover. After I’ve had too much Whisky, I cook myself a large flank steak, pan-fried in salted butter. I eat that, put on a pair of wet socks and go to sleep.

In other words, the man knows how to handle his whisky and eat a steak.

I think it's important to note that there are a few subtle differences between Offerman and his television alter-ego. Offerman's longer beard and short hair combo is a little more hipster than Ron Swanson's thick mustache, confusing haircut with a side swoop combo. Also one is real and the other fictional, if you're going to be a stickler about such things.

Happily, Offerman said in a recent interview alongside Amy Poehler that he would be happy to head back to Pawnee and don the hallowed mustache of Ron Swanson. The two were being interviewed by Ellen DeGeneres and said they would be willing to return "anytime," so long as Beyoncé joins the cast as the town's mayor, according to Us Weekly.

Here's hoping anytime is soon, and that they might be willing to include Nick Offerman's dad in the cast. He could be Ron Swanson's dad Don or something. You're welcome.