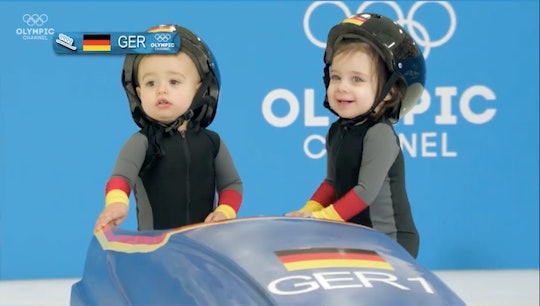 Are you a fan of babies? Of course you are. Are you a fan of watching the Olympic Games? See, if you were to ask me I would say I was mostly a fan of watching the Olympic Games. Like a lot of people, I'm down for the big ticket items, the hot topics. I want to see the Opening Ceremony, the medals being given out and (I'm sorry to say) the odd drama in the figure skating category. What can I tell you, I'm a bad person. But if this video of the Baby Winter Games was real and an indication of what we could expect, I would watch every moment of the Olympics. Because babies.

The Olympic Channel shared the most wonderful video on its Facebook page on Thursday. As the rest of the world was getting amped up to watch the Opening Games of the Winter Olympics in PyeongChang on Friday morning, it seems another type of Olympics was happening. And it looks almost exactly like the regular Winter Olympics, only with babies instead of boring grown-ups. And honestly, now I just wish that babies really did compete in, say, the curling event or wore jazzy outfits for figure skating. It is simply far more entertaining (though this in no way should take away from the years of hard work that actual Olympic athletes put in to their training. It's just... babies are funny).

Complete with dramatic music and professional, Olympic-style commentary, the video of the Baby Olympics feature international toddlers competing against each other. Like the tots from Canada and Sweden who are going head-to-head in the curling competition. Or the two-toddler bobsled category, where the "fearsome German sled" goes up against the Jamaican bobsled team.

Fans loved it, of course, taking to Facebook to praise the Olympic channel for a job well done. "The heartbreak! Hilarious. Please do one of these every week!" one viewer commented. "Omg that is toooooo adorable!! Love the pacifiers in their mouths," another chimed in.

This isn't the first time the Olympic Channel has replaced actual athletes for adorable babies in one of its videos; last April a video of babies competing in the Baby Summer Olympics racked up more than 6 million views. Because who doesn't want to see a baby weightlifter, an adorable little gymnast, or an Olympic-level swimmer who still wears floaties?

Let's face it; this year, the Winter Olympics in PyeongChang, South Korea are all kinds of fraught. Russia has been excluded from participating in the Winter Games due to a recent doping scandal, according to The New York Times. Relations between North Korea and the United States are seriously tense, and it doesn't help that Vice President Mike Pence appears to be on a mission to make matters considerably worse even as he arrives in South Korea for the Olympics. Then there are the frigid Siberian winds that are expected to make these Olympic Games some of the coldest in recorded history. All in all, the Olympics promise to be two long weeks of drama, excitement, tension, and freezing cold.

One has to wonder if things would be different if babies really did have their own Olympics. I feel almost certain the politics would be much easier to navigate. And everything is better with babies, right? Other than trying to sleep or traveling or trying to cook supper. Otherwise, babies should just rule the world.

And after watching both videos of babies competing in the Olympic Games, I feel it's safe to say this is something that needs to happen in real life soon. I mean, not the dangerous stuff or anything. But the milder Olympics, if you will.