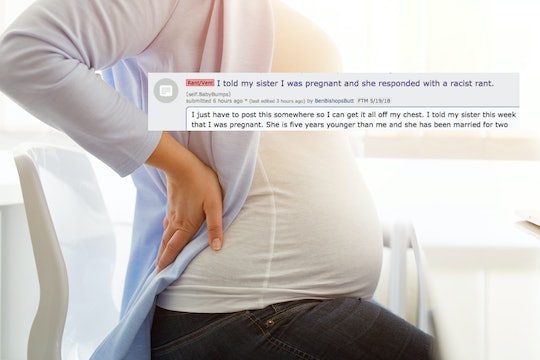 As someone who has been pregnant several times, I can tell you from experience that people all react to the news differently. I can also tell you those reactions can often be harmful, hurtful, insensitive, or just simply not at all what you want to hear. There's a viral Reddit thread about a woman telling her sister about her pregnancy making the rounds right now, and it is such a perfect example of the nonsense pregnant women have to deal with, I can't even. In fact, it's next level nonsense.

According to user "BenBishopButt" (I'm going to go out on a limb and assume that's not the user's real name), she had told her sister that she was pregnant earlier in the week. She writes that her sister is five years younger than her and married. The writer is unmarried, and the pregnancy is unplanned... because that's certainly never happened before. But, she contends that she and her partner of one year:

"were planning on spending the rest of our lives together anyways. Further I am nearly 30 years old and a survivor of cervical cancer. I was told that my chances of conceiving naturally were very low; so low that I paid to have my eggs frozen a couple of years ago."

Considering how this woman struggled in the past with potential fertility issues, you might think her sister would be happy for her. But think again.

Her sister's response to the news that she would soon be an auntie was not exactly joyful. It was hateful, unkind, and littered with racist undertones. She apparently accused the Reddit user of being a potentially bad mother, saying the future child would not be healthy because the pregnancy was unplanned, and perhaps worst of all, according to the Reddit thread, she:

INSULTED THE MAJORITY BLACK CITY I LIVE IN by calling me a insert racial slur here lover and saying it was a shithole and the only reason I live here is because I want to surround myself with... that word. And she hopes I get gangbanged in the streets. And that the baby probably isn't even boyfriend's, but some random guy I met on the street.

This is the unfortunate side effect of pregnancy; it can sometimes bring out the worst in people. In some cases, like this Reddit user's sister, a pregnancy announcement can unearth some secret, previously unspoken bit of nastiness. Racist thoughts they had possibly been keeping to themselves, jealousy. Poorly-formed medical opinions (because the last time I checked, unplanned babies are not doomed to be born with health issues; otherwise about half of all the babies in the United States would be ill, according to Fit Pregnancy.)

And it isn't just this type of situation, were the Reddit user believes her sister was hoping to give their parents the first grandchild and is therefore resentful, where pregnant women have to put up with a load of crap. There seems to be something about the nature of bringing a person into this world that makes people think they have permission to force their beliefs or opinions on you. About your reproductive choices, about the way you might raise your child. Why? According to psychologist Dr. Karen Phillip, there are a number of reasons why people react negatively to a pregnancy. She told Stuff.co:

As for parents who react negatively, Dr. Phillip noted:

Sometimes they just don't feel ready to become grandparents. And if they feel you may be unable to cope, they can worry that they may end up helping to raise the child.

In other words, these negative reactions rarely are generally about themselves and their hang-ups, and not about the pregnant mother and her situation.

In the case of this Reddit user, it seems the relationship has been damaged irrevocably. Which is a shame, because pregnant women and especially new moms need a strong support system.

As for anyone else who is trying to overcome negative responses to their pregnancies; try to remember that the negativity is almost never about you. That their reaction has everything to do with their issues, and very little to do with your happy news.

Don't let it spoil things for you... that only means they win.