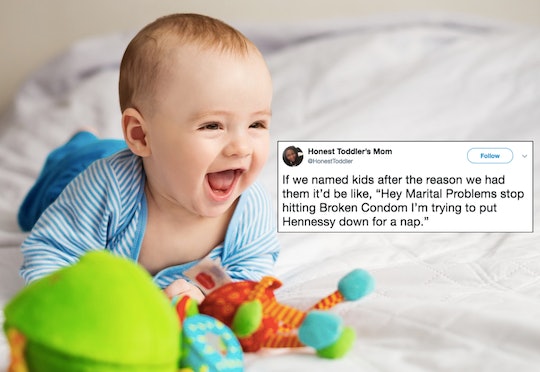 Have you ever met those parents whose kids' names have a really special meaning? Of course you have. You always know when parents have really put a lot of thought into the symbolism of their little one's name. Because they're going to tell you all about it, aren't they? They're going to be all "Oh, this is little Brooklyn. We named her Brooklyn because the night she was conceived we were in a hotel with a view of the Brooklyn Bridge...." and you're like, "great." Well, this viral Twitter thread about naming kids after the reason you had them puts all of those super beautiful, symbolic stories to shame.

Bunmi Laditan, the writer and mom behind Honest Toddler's Mom Twitter feed, got to thinking the other day about what it would be like if parents named their kids after the reason they had them. For example, my sons would be named "Forgotten Birth Control Pill," "My Kid Needs A Sibling," and "This Will Fix My Marriage, Right?"

In Laditan's case, she had her own set of reasons for having kids. As she wrote on her Twitter feed last week:

If we named kids after the reason we had them, it'd be like, "Hey Marital Problems stop hitting Broken Condom. I'm trying to put Hennessy down for a nap.

Of course, Laditan's post really got the internet's creative juices flowing. Because it's sort of a nostalgic thing, isn't it? To remember how your precious little child came to be. Her 310,000 followers got to thinking about their own special moments, and hundreds of people responded — and they came up with some doozies.

The more honest people were, the funnier the tweet, in my humble opinion. Like this one right here.

This woman is a girl after my own heart... no offense to second born kids, but how many of them would have some version of the name "The Oldest Needs A Sibling."

If these tweets are to be believed, it's possible that alcohol may sometimes have a little something to do with birthing babies.

Then there are just tweets that defy an introduction.

One Twitter follower took the bull by the horns and decided to just avoid the whole complication of kids altogether.

Laditan's suggestion that parents look at the motivation for having children is yet further proof that the writer and mom is all about bringing parents together in laughter. Her book, Confessions Of A Domestic Failure, has received raving reviews from other moms on Amazon for its honest portrayal of parenthood. One reviewer wrote, "Every mom needs to read this! Absolutely hilarious and true on so many levels! Loved it!"

The fictional book follows "new mom... hot mess" Ashley Keller as she tries to navigate the complicated world of parenting. As Laditan explained in a recent Facebook post:

This book is about a first time mom who is 100% messy. I started it five years ago but procrastinated because I was scared. It's based on my life but I had to make it fiction because CPS is a thing. Kidding. It started as my journal. That's not my phone number anymore.

I don't know about you, but I'm reading this book the first chance I get. Because there's nothing more refreshing to me than reading about the trials and tribulations of a "hot mess" mom. Even if she's fictional, it's incredibly satisfying.

And if you needed proof that getting real about how your baby came to be (and parenting in general) is always funny, there you have it. Now start thinking about what your kid might actually be called.