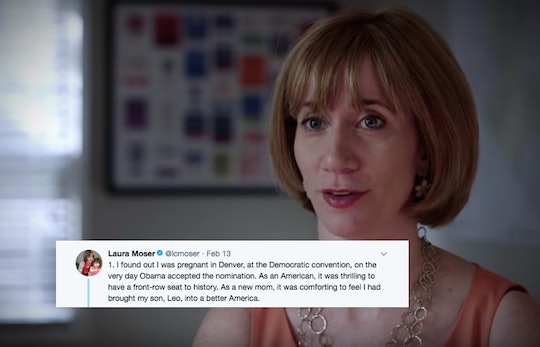 Call me Captain Obvious, but being a working mother is difficult. And not because I care for a wild toddler while also busting out article after article. No, being a working mother is hard because of the suppositions placed on me, but not his father. For example, women are expected to drop their careers once they become mothers; if they don't, they're accused of not loving their children. Never mind that research shows people doubt a working mom's — not dad's — ability to achieve work-life balance. It's all crap, which why is this powerful Twitter thread detailing the challenges working mothers face is a must-read.

Laura Moser, a Democratic candidate for Texas's Republican-led 7th Congressional District, took to the social media platform Tuesday to call out all the ways in which mothers are tested in the workforce and in politics. In a long, 15-point thread, Moser, a mom herself, breaks down how working mothers face more skepticism and receive less support than dads, and have to jump through unnecessary hoops to get ahead. But, in her thread, the 40-year-old Houston politician doesn't only look at the challenges moms face; Moser also highlights the powerful contributions working mothers make on the job and in office.

Here are just three of the important points Moser made on Tuesday.

I feel like I can't get away from writing about paid leave, but it is such a vital and necessary benefit for working parents. Paid family leave doesn't only benefit mothers trying to strike that work-life balance; it also helps all employees. Paid leave affords you the time you need for cancer treatments, to take care of your sick mom, to recover from childbirth, and so much more. Yet, the United States is the only country out of 41 nations that doesn't offer paid family leave, according to the Pew Research Center. All the country has is the Family and Medical Leave Act, which made strides in mandating time-off for certain employees, but without an actual paycheck attached to that time. That's where Democratic Sen. Kirsten Gillibrand of New York comes in. The veteran politician and mom of two kids is leading the charge for federal paid family leave, according to CNN. Gillibrand hasn't had much success in her efforts to get her bill, the Family and Medical Insurance Leave (FAMILY) Act, passed, but that doesn't mean she is letting up anytime soon.

Mothers Are The Backbone Of Powerful Movements

You may not realize it, but mothers are at the center of many political and social movements that continue to dominate today. Need proof? Check out Fatherly's list of just seven of those movements out there, from La Leche League to Moms Rising. Moms are leading the charge for tighter gun safety laws in a country gripped by mass gun violence. Black moms are the driving force behind Black Lives Matter and the fight against police brutality. And moms are the reason why the United States has stricter laws against drunk driving and driving under the influence. (In 2015, more than 10,200 people were killed in alcohol-impaired driving accidents, according to the U.S Centers for Disease Control and Prevention.)

A study published last year from the Barbara Lee Foundation found that voters have more doubts about mothers running for office than they do fathers, according to The New York Times. In particular, voters who took part in 11 focus groups in five cities continued to be skeptical of married mothers of young children even after they issued statements addressing those concerns, but felt reassured by male candidates who did the same, The New York Times reported. Adrienne Kimmel, executive director of the Barbara Lee Foundation, told the Times that the findings confirm that "traditional gender roles are still powerful, influencing what we perceive to be acceptable and appropriate behavior for men and women."

Kimmel went on to say that most people continue to "assume motherhood is a central role for women," which in turn, impacts how they view mothers running for office. Of course, that shouldn't be the case, but that's the attitude working mothers still face, even in 2018. Hopefully, Moser and other politicians like her can continue to defy expectations so that archaic gender roles are a true thing of the past.

More Like This
Julia Fox’s Apartment Tour Is Peak Mom Realness
Teacher Shot By 6-Year-Old Student Told School He Had A Gun, Was Told To "Wait"
Florida Teachers With “Unvetted” Classroom Books Could Face Felony Charges
The President Of Ireland Wants To Get Rid Of Homework & Honestly, He's Onto Something
What Parents Are Talking About — Delivered Straight To Your Inbox