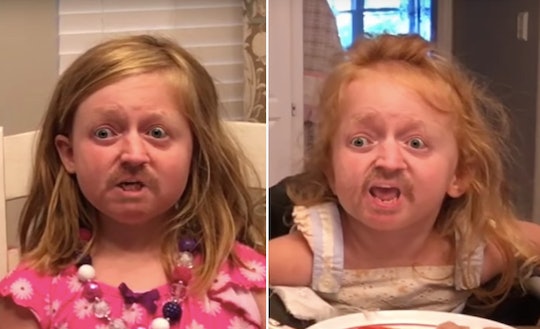 Do you know what really grinds my gears? When you cook a whopping pile of food for your adorable little cherubs and they're all.... meh. Pass. Or, as my kids still say to this day, This never needs to make it on the roster again. I mean, really? Sadly, my response to such ingratitude was a quiet eye roll. I did not have the means nor the fortitude of this dad who hilariously used face-swap on his kids in a viral video. He is now my hero.

The father of two, who runs the massively popular YouTube channel, Woodsie TV, was apparently cooking up a storm for his two daughters one day. The two girls were apparently not terribly impressed with the beautiful home-cooked meal placed before them. And parents everywhere, let's all take a moment to bow our heads and imagine a world where someone places FREE food in front of you. Food you in no way planned, shopped for, or prepared. Imagine a world where this is the sort of thing that happens.

Of course, small humans do not have to concern themselves with such things. And are therefore in a position to turn their delicate noses up at any meal they choose. So "Woodsie" decided to face-swap with the girls, to give their belly-aching a little extra panache.

As seen in the video, Queen Baby: Food Critic, the youngest daughter, Violet, got extra critical of her meal extra quick. In the voice of her father and sure, this as potentially scripted — or almost 100 percent definitely scripted — but I'm telling you right now every toddler everywhere has these thoughts on the inside. They just can't quite wrap their limited vocabulary around these particularly savage words:

Oh, you know I was just saying I hope tonight for dinner we have a plate full of hot garbage, so thank you.

As Violet the Sassy Toddler continues to tell her father that his food tastes like garbage, his older daughter Embry tries to be a little more diplomatic:

Until the big moment when she wants to know if she can have dessert. She can, but she has to eat her entire dinner because that's the rule of pretty much all parents since forever (my own mother *still* won't let me have a cookie if I don't finish my supper). Embry isn't impressed... she turns on him immediately. What follows is a lesson in savage perfection.. she fires off one hit after another:

Hey, Dad, do you actually know how to cook, or do you like, just know how to put trash in the oven?

Hey Daddy, knock-knock. It’s the police. They’re here because you tried to poison your children with this garbage dinner.

It’s like if a bucket of vomit could commit a hate crime, it would be this dinner.

"Woodsie," who has more than 7 million followers who love his series of face-swapping videos, clearly hit a nerve with this one. It has already been viewed more than 470,000 times, and the comments are all of the "I nearly peed my pants" variety.

Because the only way to survive parenting is to laugh. Like, laugh a lot. At yourself, at those tiny people who are suddenly ruling our lives (and who make it clear that mayhem is their number one priority).

And if just regular old laughing doesn't quite do the trick, try face-swapping with your kids and making videos a la "Woodsie." Because apparently nothing is funnier than putting an adult face on a complaining toddler.