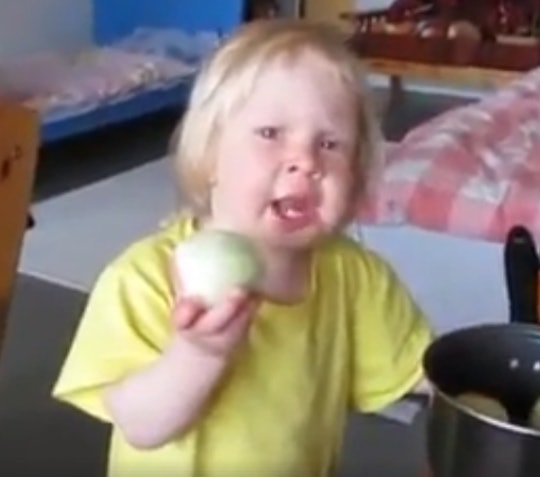 There is nothing in this world quite so determined as a toddler. Determined, stubborn, whatever you want to call it. The point is, toddlers haven't had to come to terms with the soul-crushing disappointments and expectations of adulthood, and are therefore still able to believe that whatever they want to do is most likely the right thing. Even if someone else, say a wise parent who might know a thing or two more than them, tells them they're wrong. Case in point; the toddler eating an onion in this viral video that has the internet in stitches.

Not that this little tyke would tell you it was an onion. No, according to the caption on the video shared by Gesa Croonan on Facebook on Wednesday, the toddler insisted it was an apple. And kept on insisting until getting into a little hot water. The caption reads:

Mom, can I have this apple?

That's not an apple, it's an onion.

Well, if you insist... (would rather die than admitting an error).

I'm assuming this mom figured she would let the onion eating happen as a little life lesson. Sometimes it's ok to admit you're wrong, sometimes you need to listen to your parents because they know way more than you. Sometimes an apple is an onion... whatever.

Unfortunately, this toddler wasn't giving in.

This kid, right? Not only eating the onion (and trying not to look disgusted) but going back for bite after bite. Looking into the camera with fierce determination, pretty much daring any one of the more than 28 million people who have watched this video since Wednesday to call that "apple" an onion. Like, go ahead. Say it. Call it an onion... I dare you. Side note: you really, truly need to have the audio on for this video. To hear this toddler breathing heavily through the ordeal is maybe the best part. Or the eye rubbing. I'm not sure.

The video, which was also shared on Reddit, has racked up some pretty hilarious comments from the internet. Many social media users begrudgingly praised the toddler for sticking with it.

It's possible it is a Vidalia onion or some other sweet onion that isn't so bad. Or it's possible that kid is just willing to die on that hill.

That kid is goddamn trooper.

This kiddo has layers of commitment. I commend their fruitless efforts.

One has to wonder what this little one will be like as a grown-up... I'm not going to lie, George Costanza from Seinfeld comes to mind.

There were plenty of people on Twitter making the solid case that this kid eating an onion while insisting it was an apple could be the perfect metaphor for more than one situation.

We all know someone like this toddler, and if you don't recognize one of your friends (or probably one of your own kids) in this toddler insisting an onion is an apple, you might actually be that person yourself. Determined, willful, stubborn. These are not terrible qualities to have, of course. Unless you're going to get stuck munching your way through an onion rather than admitting you might have made a mistake. On account of you're just a small child.

I see two things happening down the road; either this kid is going to be a brilliant ruler of a country some day, or a terrifying despot. It could go either way.

Or there's another possible option. The kid could just grow out of being stubborn. For some reason, I hope that doesn't happen. Stick with it, kid. One of these days, that apple is going to be an actual apple. You'll be right, and we'll all rue the day we dared to contradict you.