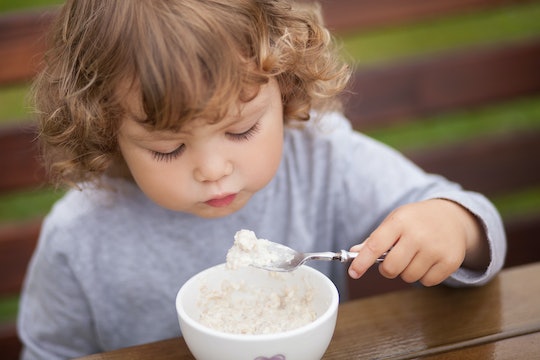 This Weeding-Killing Chemical Has Been Found In Some Children's Foods, New Report Says

People don't always think about everything that goes into the food they're eating. In addition to looking at the living conditions of animals that produce the food, and even for grains and vegetables, there are some factors to be on the look out for, as a new report has found. According to the non-profit Environmental Working Group, as CBS News reported, a weed-killing chemical was found in some children's breakfast foods and here's what parents need to know about the group's findings.

The chemical glyphosate is no stranger to media spotlight; it is an active ingredient in Roundup, a frequently used pesticide. (Romper's request for comment from Monsanto, the company that produces Roundup, was not immediately returned.) In the past, glyphosate found its way into the media after being linked to shortened pregnancies. Last year, the chemical was also found in some ice cream and cereal brands, according to tests conducted by the Organic Consumers Association.

In a new study by the EWG, trace amounts of glyphosate were found in some oats, granolas, and snack bars. The group tested 45 products and 31 of them contained higher levels of glyphosate than what some scientists consider safe for children, as outlined by CBS News.

Products such as Quaker Old Fashioned Oats, Cheerios, Quaker Dinosaur Egg Instant Oats, Great Value Instant Oats, and Back to Nature Classic Granola contained excessive levels of the herbicide, according to the EWG's report. (None of the brands immediately responded to Romper's request for comment.)

But, what exactly does this mean?

The effects of exposure to glyphosate have been contested. On its website, Monsanto notes that "no other pesticide has been more extensively tested then glyphosate" and, in evaluations across four decades, experts conclude that "glyphosate can be used safely according to label instructions."

However, in 2017, California listed glyphosate as a chemical known to the state to cause cancer, according to the California Office of Environmental Health Hazard Assessment. Even after coming under fire by some politicians, the World Health Organization maintained its claim that glyphosate can cause cancer, according to Science. Then in August 2018, CBC News reported that Monsanto was ordered to pay $289 million in a Roundup trial, where one man claimed the weed killer caused his cancer.

"I was shocked," Dr. Jennifer Lowry, who heads the Council on Environmental Health for the American Academy of Pediatrics, said, according to CBS News. "We don't know a lot about the effects of glyphosate on children... And essentially we're just throwing it at them."

The Food and Drug Administration has been testing food for glyphosate for two years and has reportedly found "a fair amount," according to internal emails obtained by the nonprofit US Right to Know, as The Guardian reported. However, the FDA has yet to release their findings, prompting non-profits like the EWG to investigate further.

The EWG has calculated its own, stricter guidelines for exposure levels. Because children and developing fetuses have increased susceptibility to carcinogens, the federal Food Quality Protection Act supports an additional 10-fold margin of safety to any exposure levels. Knowing this, the EWG calculated that "a one-in-a-million cancer risk would be posed by ingestion of 0.01 milligrams of glyphosate per day."

In other words, the EWG outlines that a child would only have to eat a single 60-gram serving of food with a glyphosate level of 160 parts per billion (ppb) to reach the maximum dose. The majority of products exceeded that amount, with the following holding top three: Giant Instant Oatmeal, Original Flavor at 760 ppb; Back to Nature Classic Granola at 620 ppb; and Quaker Dinosaur Eggs, Brown Sugar, Instant Oatmeal at 620 ppb.

Responding to EWG's study, Quaker said according to CBS News:

We proudly stand by the safety and quality of our Quaker products. Any levels of glyphosate that may remain are significantly below any limits of the safety standards set by the EPA and the European Commission as safe for human consumption.

In a response statement, the EWG wrote:

General Mills and Quaker Oats are relying on outdated safety standards used by a government agency that is notorious for neglecting new science on chemicals... Just because a pesticide level is legal in food doesn’t mean that level is safe.

Ultimately, navigating glyphosate in food is tricky because of how common the product really is. For any parents concerned, the EWG urges people to contact the Environmental Protection Agency to restrict pre-harvest applications of glyphosate, along with telling companies to source glyphosate-free oats.

More Like This
The Cannon Legacy Is Strong: Here's A Look At All Of Nick Cannon's Kids
Is 'Hocus Pocus' Too Scary For Kids Under 5?
Kids With Head Lice Don't Need To Miss School, AAP Stresses In Updated Guidelines
10 Kids’ Shows With Great Potty Training Episodes