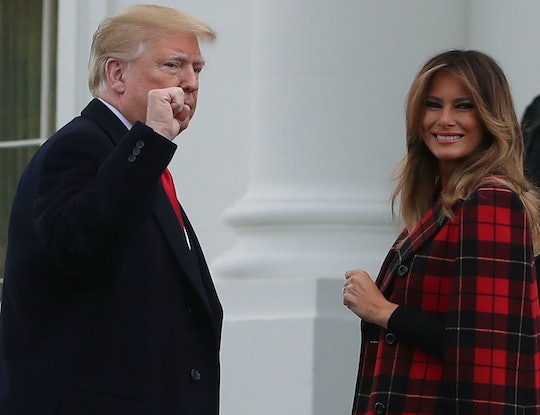 There's been at least one official Christmas tree inside the White House since 1889, so you would think by now everyone would be used to different holiday styles and administrations' unique approaches to December decorating. But this year's White House Christmas decor versus last year's shows Melania Trump likes a monochromatic look.

Beginning with President Benjamin Harrison, the first Christmas tree in the White House was a simple one, replete with candles, toys, and ornaments to furnish the tree for the benefit of the president's grandchildren, according to Town & Country.

The magazine added that the first electric lights on a White House tree appeared in 1894, during the presidency of Grover Cleveland (he also brought electricity to the White House and I'm sure his successors are very grateful).

Since then, different eras of fashion and home decor have come and gone. After First Lady Lou Henry Hoover got especially festive in 1929, the honor of trimming the house's Christmas tree or trees has been specifically reserved for the commander-in-chief's wife, according to the White House History website.

When it was Melania Trump's turn to trim, though, just as in the case of her husband's presidency, there have different opinions regarding her results. Last year's theme — "Time-Honored Traditions," according to the Washingtonian — drew mixed reviews for its white-on-white trees and fake snow, according to USA Today.

The hallway of the mansion's East Colonnade, however, got singled out in a number of Twitter comments for the fact that the winter-y white branches could be interpreted as giving off a ghoulish, eerie effect. This year, the same hallway got red-on-red trees... which of course led to more reactions.

The idea behind the theme was to pay homage to the "unique heritage" of the nation, according to the White House's official website. "This is a joyous time of year when we decorate the White House for the Christmas Season,” the First Lady said. “Thank you to the many volunteers and staff who worked hard to decorate the halls of the People’s House in Christmas cheer.”

The site notes that the historic building will host over 100 open houses this season, allowing more than 30,000 members of the public to tour the grounds and take in the scene in person.

And there are many who question, given the current political climate, recent forest fires, and global warming, whether so many resources should go into White House Christmas decorating at all.

It was actually First Lady Jacqueline Kennedy who started the tradition of having a yearly theme when she chose to decorate her tree with ornaments from The Nutcracker in 1961, according to Town & Country, which added that things got more eclectic as the years went by, such as the time Lady Bird Johnson used popcorn on the White House tree in 1967.

In recent years, the Clintons decorated with a whopping 36 trees throughout the house, according to the Washington Post. White House History noted that Laura Bush chose the theme "All Creatures Grand and Small" in 2002 to play up her love of animals while Michelle Obama emphasized the "Simple Gifts" in life — the non-materialistic ones — in her 2010 holiday approach.

And while people have had a lot of different feelings about the White House at Christmastime, it's worth noting that many think the First Lady's decor is just fine.

Whatever the case, it's clear that Trump appreciates a monochromatic motif. It remains to be seen what she'll choose in the future, but a theme (or at least part of one) that's all about one singular color seems to be a good bet.

More Like This
20 Toys You Don’t Want To Miss From Amazon’s Top Toys List Of 2022
Lindsay Lohan Channels Meredith Blake In Her New Christmas Rom-Com
15 Holiday Decorations Costco's Already Selling
When Is Thanksgiving? All About Turkey Day 2022