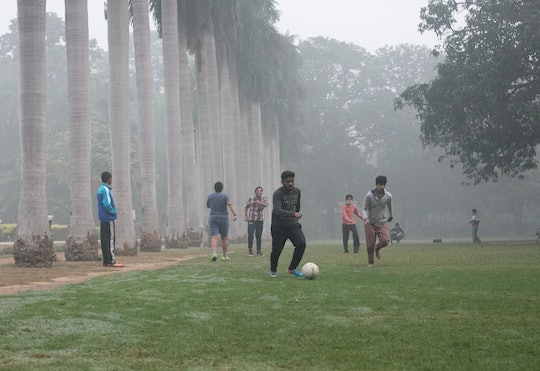 Last week, a 9-year-old girl in Nainital, India, took one of the boldest steps possible to fight climate change in India: Ridhima Pandey filed a lawsuit against the Indian government over its failure to adequately address the threat of climate change. Pandey's reasoning for taking the government to court? She said India's failure to take action on climate change will affect her generation and future kids, all of whom are currently too young to intervene on their own behalf.

Pandey filed her public interest litigation petition with the National Green Tribunal, a court reserved specifically for environmental cases in India, the world's third largest emitter of carbon pollution. Pandey, whose mom works within a forestry department and whose dad works with an environmental non-profit group, told The Independent she knew that there were steps the government could be taking to staunch the effects of climate change.

"My government has failed to take steps to regulate and reduce greenhouse gas emissions, which are causing extreme climate conditions. This will impact both me and future generations," she told The Independent. "My country has huge potential to reduce the use of fossil fuels, and because of the Government’s inaction I approached the National Green Tribunal."

It's easy for politicians to make the case against more stringent environmental regulations when they point to people's potential loss of jobs. But the alternative to that, as Pandey's case so strongly highlights, is endangering our children's futures. Diseases associated with pollution and unclean environments already kill one in four children under the age of 5 — a total of 1.7 million child deaths a year, according to the World Health Organization — and at the rate climate change is progressing at now, those numbers are likely to worsen.

Pandey isn't the only child who has taken her government to court over climate change, either. A group of 21 kids, who range from age 9 to age 20, sued the American government just last year, arguing that the federal government's insufficient climate action puts their rights to life and liberty at risk. Their lawyer argued that politicians have known the risks of climate change inaction for years, yet they continue to put young lives in danger, according to TIME. In March, the Trump administration tried to appeal the case before it even went to trial, and several fossil fuel industry groups — including the National Association of Manufacturers, the American Fuel and Petrochemical Manufacturers, and the American Petroleum Institute — have joined the federal government's side, according to Business Insider. Some are already calling it "the biggest case on the planet."

Kids who are fighting for climate justice, like Pandey, should be applauded — and they should serve as a stark reminder to adults that our children will have to live with whatever messes we make while we're here.