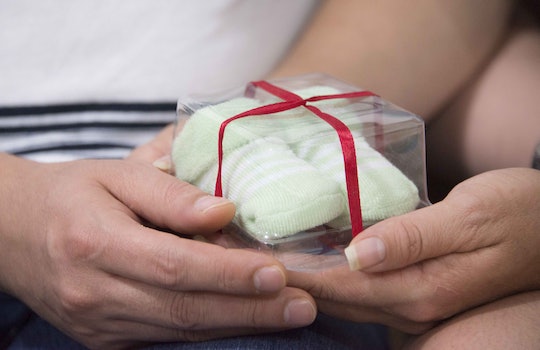 Medical professionals aren't crazy about the term "three-parent baby," but that is technically what they now have the potential to create. A new study from a university in the United Kingdom has determined that three-person IVF treatment is safe, meaning that once the procedure is approved, doctors will have the authority and the ability to produce healthy babies with the DNA of three people: a man, a woman, and an egg donor. The procedure lauded in this study is specifically a "mitochondrial donation" designed to prevent women from passing genetic diseases to their babies, but similar studies show that breakthroughs like this could have positive implications for same-sex couples who want to become parents as well.

Scientists from Newcastle University found that the process of removing a woman's mitochondria and replacing it with a donor's just hours after fertilization results in a healthy baby whose DNA would be 0.1 percent from the donor woman, BBC News reported. It's an infinitesimal percentage, sure, and the process will first be approved for women with the genetic illnesses, not the same-sex couples, if the Human Fertilisation and Embryology Authority (HFEA) gives it the OK, but it shows that it is possible for lesbian couples to have a baby that has DNA from both parents.

In 2015, researchers at the University of Cambridge, also in the United Kingdom, successfully trialled a process on human matter that, once perfected and approved, would make it possible for a baby to be born with DNA from both same-sex parents.

These scientific advances have the ability to allow same-sex couples looking to become parents another option in the (probably near) future, in addition to adoption and surrogacy and sperm donation. It's absolutely true that no matter how parents conceive or otherwise bring a child into the world or their families, they are all real parents who can raise a child just as effectively and lovingly as any parents, straight or gay. But still, for those who feel the pull to have a biological relation to their kids — instead of just one parent having that — it's pretty cool to see that science is catching up increasingly positive attitudes toward same-sex marriage in the United States.

The key here is to give couples the options to conceive, parent, and grow their families as they want to. There's a sense of insecurity that can come along with not being a baby's birth mom, as new mom Lacey Vorrasi-Banis wrote in a Romper essay about welcoming her new baby daughter when her wife gave birth to her:

I find myself simultaneously clinging desperately to this laundry list in order to prove that I'm an equal parent, while also resenting these menial yet necessary tasks for taking me away from her, for making me less present. I live with the gnawing feeling that what our daughter will remember most is the loving and warm embrace of her other mom, and that I will just be this blurry figure that whisked past her as she was being fed, darting from one chore to the next.

Vorrasi-Banis also detailed how she and her wife elected to use a Korean sperm donor so the baby would have "physical representation" from both of them (Vorrasi-Banis is Korean-American). Still, she was crushed when someone asked whether she'd have to adopt the baby, and when someone else told her the baby didn't "need" her because she wasn't the one breastfeeding. That's rough, for any parent.

There are so many ways to be a family, and having a baby with some DNA from both parents certainly won't solve all the unique challenges non-traditional families can face. But it can make it possible for same-sex couples to realize the families they have dreamed about, and that's major. Just as it's important for science to help mothers avoid passing dangerous genetic disorders onto their children, providing options for all kinds of parents is an admirable task.

More Like This
All Your Questions About Getting Pregnant After A Tummy Tuck Answered
All The Reasons Why You Might Have A C-Section
Breaking Down The Different Types Of Postpartum Infections
Are Movie Theaters Too Loud For Pregnant People? OB-GYNs Explain