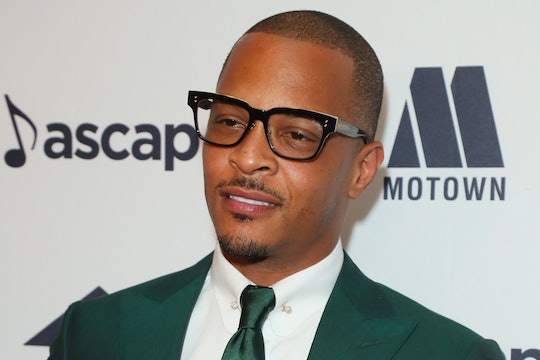 In early November during a podcast interview, T.I. made comments about "checking" his daughter's hymen annually. Considering the rapper's daughter, Deyjah, is an 18-year-old adult who doesn't deserve to have her privacy violated (not to mention an intact hymen can't prove virginity), the remarks sparked widespread controversy. T.I. finally addressed the backlash Monday in conversation with Jada Pinkett-Smith, claiming he "embellished" his story.

To refresh a bit, T.I. went on a long discussion about monitoring the state of his daughter's virginity via her hymen (once again, this isn't possible) after being asked on the Ladies Like Us podcast whether the pair have had the "sex talk" yet. "Not only have we had the conversation, we have yearly trips to the gynecologist to check her hymen," he revealed, according to The Hill. "Yes, I go with her."

If you're wondering how any of this is legal, he claimed Deyjah supposedly gave him permission to view the medical results, stating, "I’m like, 'Deyjah, they want you to sign this so we can share information. Is there anything you would not want me to know? See, Doc? Ain't no problem.'"

There's a laundry list of reasons why T.I.'s remarks are problematic, a sentiment he addressed during an interview Monday on the Facebook Watch show Red Table Talk. Arguing his intentions “have been terribly misconstrued and misconceived," T.I. explained, “I never said I was in any exam room. That is an assumption; that is a falsity. I never said it was being done present-day as an 18-year-old. I never said that her mother wasn't present."

The "Whatever You Like" singer also claimed to come from a place of lightheartedness, explaining, “I think all of this surrounds a conversation I was having in a very joking manner when asked how do I deal with parenting in this day and age."

He continued, “From a place of truth, I began to embellish and exaggerate, and I think a lot of people took it extremely literal because if you put any of my reputation — who I am as a father and who I've been — I honestly thought people knew me better than that.”

When pressed about the intentions behind his commentary, T.I. unleashed a narrative about exhibiting control over his daughter. “In order to guide or direct, you must have a certain level of control,” he said, according to The Washington Post.

He added, “Well I think in the age or the time, our women, black women are the most unprotected, unattended, disregarded on the planet. I’m being criticized because I’m willing to go above and beyond to protect mine.”

Of course, Deyjah is an adult who can protect herself and make her own decisions. "'I respect women by treating them like property.' Nice try," one person tweeted about the rapper's questionable logic.

Speaking of Deyjah's feelings, T.I. is remorseful for embarrassing her by publicly commenting on the situation. “She did have a problem with me talking about it however, and I understand that, and I am incredibly apologetic to her for that,” he said, according to People. “She understands my intentions and she knows who I am, who I’ve always been.”

I'm not sure if T.I. has actually learned anything from this controversy, but at least he acknowledged Deyjah deserved an apology. That being said, it's concerning to hear he still doesn't understand why his comments sparked outrage in the first place.