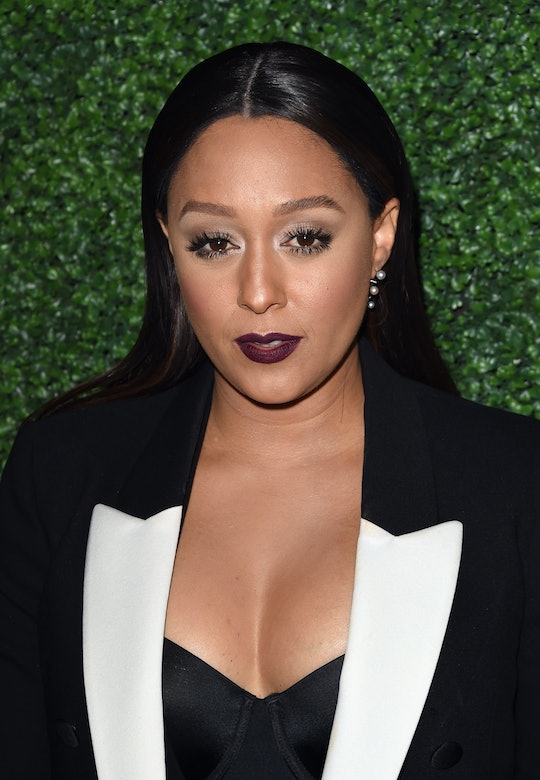 Tia Mowry is a bit of a trailblazer, isn't she? An actress, a lifestyle guru, a celebrity chef, an author, a wife, and of course, a mother. She's had a long and varied career, which isn't always the case for women in Hollywood. Mowry has come a long way since her years playing Tia Landry on the sitcom Sister, Sister with her twin Tamera Mowry in the 90s, and she's well aware that the world looks very different now. Which suits her just fine, because Tia Mowry is on a mission to teach her daughter "self love" as a young black woman over the next few decades and she's hoping to see some more positive representation in the media to help her with that.

Mowry and her husband Cory Hardrict are parents to two children, 7-year-old son Cree and 9-month-old daughter Cairo. During a new episode of Tia Mowry's Quick Fix on Kin, the actress opened up about all of her hopes for her daughter's future. She admitted that even though her daughter is just 9 months old, she's basically "9 months going on 30; this girl is so full of personality, I feel like she's grown already."

When Cairo does eventually grow up, though, Mowry has a whole host of dreams and aspirations for her daughter that all boil down to the same thing — self worth.

As the proud mom explains in the video, she wants her daughter to grow up feeling "confident." Mowry says, "And I feel like that starts with you not looking for people's approval. That's really important whether you're a guy or a girl, for you to know who you are for yourself."

That being said, she is planning to make sure her daughter always knows she is loved.

"If she's loved at home by her father, by her mother, by her family unit, then she's going to know what love is," Mowry says.

Beyond knowing she is loved by her family, Mowry also stresses that her little girl should be able to love herself as she gets older, and she has some ideas on how to make sure that happens.

In the video, Mowry explains, "She's going to grow up to be a beautiful black woman with beautiful curly hair, and beautiful skin. And for me growing up, I didn't really see a lot of those images around. Whether it was at school, whether it was on television, etc."

She added, "I think it's really important for me that my daughter is exposed to those images."

Just like her mother did with her when she was growing up, Mowry plans on making sure her daughter has access to magazines like Essence that showcase strong, beautiful black women. Fortunately, there are more examples of positive representation for black women these days, with movies like Black Panther carving a new path, as noted by Media Commons.

Raising children to love themselves, to be confident and secure, and happy and good — this is what most parents want for their kids.

But as Tia Mowry has proven, sometimes it's good to make sure you've got a game plan to keep you focused.