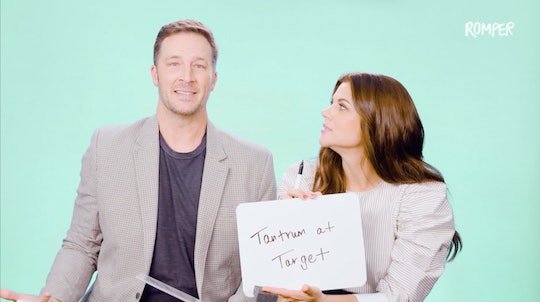 When Tiffani Thiessen and Brady Smith came to visit the Romper office in New York City, we had no idea the conversation would lead us to poop. But that's exactly what happened when the couple and parents of two played "How Well Do You Know Each Other?" in our studio. To be fair, there are plenty of parenting stories that involve poop — but Tiffani Thiessen and Brady Smith's most embarrassing parenting moment comes with a catch.

For the game, we sat Thiessen and Smith down to answer some hard-hitting questions about each other. After fourteen years of marriage, as Thiessen proudly points out early on in the game, we were hopeful they knew each other pretty well. But the questions we asked — "Most competitive?", "Favorite thing to do on date night?", etc. — produced some very hilarious results. As you'll see in the video below, even Thiessen and Smith couldn't stop laughing.

One question in particular brought on a hard case of the giggles for these proud parents. We asked them, what's your "most embarrassing kid moment?" To be fair, the subject of both their answers were relatable — poop and tantrums. But upon clarification, specifically on Smith's part, their embarrassing moments really took a bit of a turn.

Despite Thiessen's best efforts to interject, Smith elaborated on exactly what happened in his daughter, 9-year-old Harper's, classroom that fateful day.

"It was a very small bathroom. I had to go to the bathroom. When I opened the door and tried to sneak out... she was standing there," Smith shared, explaining that it happened one day when he was picking her up from school. "And she's like, 'Dad! God!'"

Now as we all know, everybody poops — there's even a book about it, which maybe Harper should read — but not everybody likes talking about it.

"We have kids. That's all we talk about," Smith reminded her. But that didn't seem to make it any easier for Thiessen, who quickly replied: "You're not talking about kids poop! You're talking about your poop!"

Note to parents everywhere: Avoid pooping at your children's school, because they likely won't hesitate to call you out on it.

There is no easy way to get off the topic of poop, is there? I'm going to give it the old college try right now.

Brady and Thiessen were visiting Romper to talk about the children's book they wrote together, "You're Missing It!" It's a cautionary tale about parents who might be spending a little too much time staring at their phones, and not enough time being "present" with their families — especially young children. We're all a little guilty of that from time to time, aren't we?

The story was inspired by a moment that happened within their own home, when Thiessen told Smith to put his phone down while he was in the backyard pushing their son, Holt, on a swing.

"I was always raised in a house where we’d gather around the dinner table, everyone was present, and we’d have good conversation about our days," Thiessen told Romper in a previous interview published about the couples collaboration. "Brady’s family was the same way. So now we really try to continue that."

If the vibe at home for Thiessen and Smith is anything like the video above, their family likely spends a lot of time laughing. Those are the moments no one wants to miss, even if the laughter is caused by the topic of dads poop.