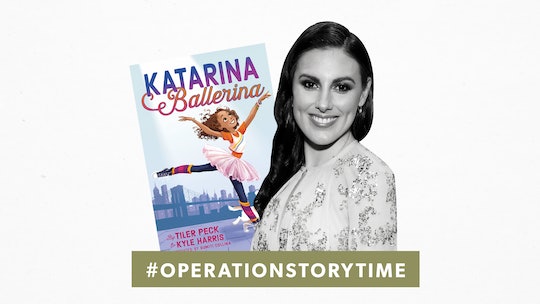 “I love getting messages from parents,” New York City principal dancer Tiler Peck tells Romper over a spotty cell connection from her parents’ home in Bakersfield, California, where she’s been quarantining and live-streaming free ballet classes on Instagram since early March. “The moms will say, ‘My daughter's never had the opportunity to ever dance to any live music — thank you for giving her this gift,’” shares the ballerina, who has been inviting friends like the Broadway star of Little Mermaid, Sierra Boggess, to accompany her virtual classes. “And I just never even thought of that. And now I'm like, ‘Okay, we need to have as much live music possible for these kids!”

Those classes, and Peck’s host of guests including more Broadway stars and celebrities like Jennifer Garner and Leslie Odom Jr., have attracted thousands of people from all over the world. Peck has received messages from South Africa, Australia, Brazil, and Iraq, to name a few; participants include everyone from "6-year-old kids," to "40-year-old men who are taking it up as a hobby and football players wanting to work on their technique." This may seem like what Peck was born to do, but actually she's a bit of a polymath. In addition to becoming a New York City Ballet principal at age 20 — the highest anyone can go in ballet — she has appeared in movies (including 2001’s Donnie Darko), she designs a dance wear collection for Body Wrappers, and now she's adding children's book author to her CV. Written in collaboration with actor Kyle Harris, Peck’s friend and co-star in several projects including most recently the Broadway bound musical Little Dancer at the Kennedy Center in Washington, DC, Katarina Ballerina (Simon & Schuster/Aladdin) is the story of a 10-year-old girl from Queens who dreams of being a ballerina. But, like many aspiring Sugarplum Fairies, she faces some serious obstacles, starting with her pigeon toes and her single dad’s finances.

To celebrate her book launch day, the ballerina author joined Romper's #OperationStorytime and read an excerpt of her book.

A recent article about Peck leads with the antidote that she began dancing as soon as she could stand, while Katarina is already old enough to walk to her middle school and take the subway around the city (often accompanied only by her trusty dog, Lulu, modeled on Peck's own canine baby, Cali). But Peck and Harris didn’t set out with the intention of making a point about Katarina’s age; she tells me there are a lot of dancers in her company who came to ballet a little later. (“One girl I know, she didn't start until she was 12 and she's a principal now.”) What they did want to emphasize is the idea that what you need to succeed at something like ballet is not the “perfect body,” but rather, “that passion to do whatever you do.”

Katarina may have missed the years when she’d be tumbling her chunky toddler legs across a stage in pink tights and an adorable tutu, and, like those of her co-creater Harris (a soccer kid who went on to study musical theater), her toes naturally turn in. But she possesses something invaluable. “We all have our own special gifts that make us stand out and Katarina has that light that you can't teach somebody,” says Peck. “You can ... help people work on their technique, if they are focused and they're driven and they're determined. But you can't teach someone to have that inner love and passion that kind of just shines and pours out that makes somebody want to watch you dance.”

Healthcare workers are these amazing heroes that we can't thank enough, and if I can do any part in this — by staying at home to help them, and also just keeping people happy and positive and connected through movement — I'm happy to do that.

As with any endeavor, holding yourself up to an imaginary ideal, or, as in Katarina’s case, to other girls who seem to fit the mold of a perfect ballerina (complete with the perfect ballerina bun), is a losing proposition. “You can't compare yourself to the person standing next to you,” Peck says. “I mean every single person in the New York City Ballet is a great dancer! But what makes me unique? … That's what you have to focus on.”

Peck, whose recovery from a debilitating neck injury that could have ended not just her career but her ability to walk has been well documented, also wanted to make it clear that while Katarina’s passion for ballet comes from a place of joy, nothing will get her where she wants to go more than plain old hard work.

"It's great that she has fun, but I think it's also important that we let these kids know that it doesn't come easily," Peck remembers thinking during their writing process. “It's not just like, ‘Oh, I love to dance so I should.’ Yes, I think anybody who wants to dance could, but I also thought it was very important to learn the lesson that you really have to work hard if you want to be a ballet dancer. It doesn't just come easily. It takes a lot.”

It’s this combination of passion, talent, and dogged determination that makes Peck herself the wildly successful dancer she is, and in a roundabout way, it’s what has revealed a couple of silver linings turned this scary, uncertain time. Having spent much of her childhood traveling hours away from home for dance classes almost daily, and then moving to New York City at 15, Peck says she’s never had six weeks with all of her family together and it's been “incredible.”

“We were never really home to eat dinner together. And so I had been enjoying playing Monopoly at night or watching a movie. I am holding on to that and then these classes,” she says of the Instagram Lives that are Peck’s contribution to the stay-at-home movement. “Healthcare workers are these amazing heroes that we can't thank enough, and if I can do any part in this — by staying at home to help them, and also just keeping people happy and positive and connected through movement — I'm happy to do that,” she tells me. “[The classes] motivate me just as much as I motivate everybody else. I look forward to them every single day.”

Children who read and love Katarina Ballerina will have something more to look forward to: Peck says she and Harris have a two-book detail with Simon and Schuster.

“I really just hope people enjoy the book,” Peck tells me. “It's a great time for books to come out because parents are looking for things to keep their kids occupied, and so I'm so happy that Katarina will hopefully be inspiring kids during this kind of stressful time.”

Tune in to #TurnOutWithTiler on Peck’s Instagram stories every day at 10amPST/1pmEST. And tune in to Romper’s instagram on Tuesday, March 12, for a special ballet class just for the kids of Romper readers! If your child has a question they’d like to ask Miss Peck to answer after the class, you can email it to us before Friday, May 8th: advice@romper.com.