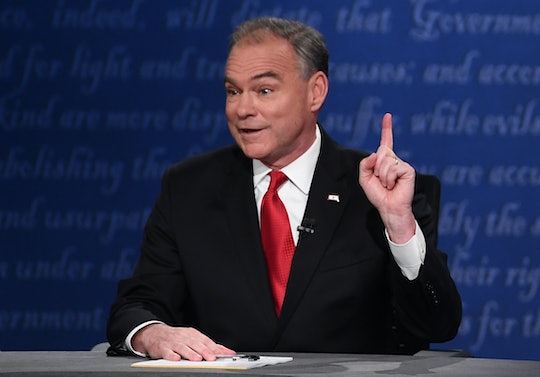 Though one vice presidential candidate is definitely more pro-women's rights than the other, he is by no means perfect. Tim Kaine's sexist Miss Universe quote shows that perhaps both vice presidential candidates need a lesson in equality. Though it was likely meant as an offhanded comment spoken carelessly in the heat of debate, his lack of attentiveness probably didn't sit well with female voters — a demographic whose issues were, let's face it, more or less neglected until just about the bitter end of 90-minute debate.

Donald Trump's comments regarding Alicia Machado haunted him for the days following the first presidential debate, and continues to do so. Clinton's bringing these moments up at the first presidential debate was just the beginning of Trump's issue with Machado. The former Miss Universe has made it known that, in the past, Trump has called her insulting nicknames like "Miss Piggy" and "Miss Housekeeping." Kaine unfortunately perpetuated this view of Machado as a political piece by making his aside, calling her by her former title and not her name.

Furthermore, he brought attention to the allegations Trump has made against Machado, as shown in Trump's tweeting: "Did Crooked Hillary help disgusting (check out sex tape and past) Alicia M become a U.S. citizen so she could use her in the debate?" By and large, Kaine really didn't need to go there; it was not the time nor the place.

At the end of the debate, though, Kaine was able to redeem himself. When the candidates eventually discussed women's issues in the final round, Kaine asked a very pointed question to Pence about his running mate: "why don't you trust women? Why doesn't Donald Trump trust women?"

Pence didn't have any semblance of a rebuttal for this. Many people are regarding this as Kaine's strongest moment of the debate, painting him as collected and focused. Perhaps if Kaine had been able to integrate more women's issues into the conversation before this moment, he would have performed a bit better. Twitter celebrated the acknowledgement of women in an otherwise male-dominated debate.

Kaine's "Miss Universe" moment seemed like a canned, rehearsed line that was accidentally blurted out of place. Regardless, it isn't likely that Kaine's performance will hurt Clinton's numbers. Both Kaine and Pence provided lackluster presentations that pale in comparison to the erratic, impassioned, and surprising natures of their respective presidential nominees. Now, the election focus will shift one final time, back to the presidential hopefuls themselves and away from the vice presidential nominees.