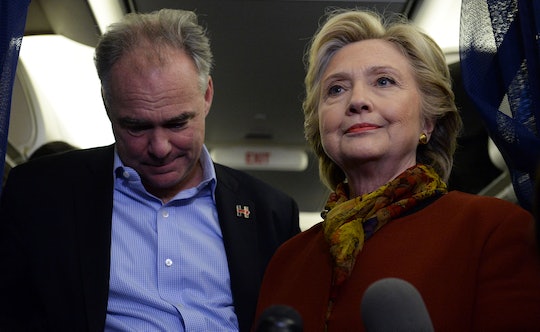 What a difficult day Wednesday has turned out to be for Democratic nominee Hillary Clinton and her running mate, vice presidential candidate Tim Kaine. As Kaine introduced Clinton, it was clearly an emotional moment. And Kaine found the one perfect William Faulkner quote that defines how Clinton supporters are feeling today:

They killed us, but they ain't whooped us yet.

Virginia Sen. Kaine was of course alluding to the Democratic ticket's shocking defeat by GOP presidential nominee Donald Trump. While most polls favored Clinton to be elected as the 45th President of the United States (and first woman president in American history), Trump managed to come out on top. He is now the President Elect, and while his supporters are jubilant in their success, there also seems to be a darker side to their victory. Despite Clinton's defeat, Trump's supporters continue their chants of "Lock her up". Fights were erupting between Trump and Clinton supporters outside the White House. Trump praised Clinton in his victory speech for her tenacity and hard work to tepid applause from his supporters. America woke up on Wednesday to a country that has been well and truly divided. Clinton supporters were despondent, Trump followers unabashedly jubilant. And then Kaine reminded us with one simple quote that the fight is not over:

While Kaine was clearly emotional (at one point during his introduction he appeared to be holding back tears), the world was truly waiting to hear what Clinton would have to say in the face of her defeat. She had reportedly prepared a concession speech to deliver on Tuesday night at the Javits Convention Center in New York where she was holding her election night party, but was too upset to deliver that speech. A speech she surely didn't think she would be expected to give. On Wednesday, after Kaine introduced her at the New Yorker Hotel, Clinton gave an elegant, humble concession speech worthy of a woman of substance. She was gracious about Donald Trump's new position as President Elect, offering her congratulations and hoping he would serve the country well.

I hope that he will be a successful president for all Americans. This is not the outcome we wanted or we worked so hard for, and I'm sorry we did not win this election for the values we share and the vision we hold for our country.

Clinton thanked her supporters, thanked her family, thanked anyone who contributed to the campaign. And she had a special message for women out there who were so hoping to shatter that glass ceiling; do not give up hope.

And to all the women, and especially the young women, who put their faith in this campaign and in me: I want you to know that nothing has made me prouder than to be your champion.

Now, I know we have still not shattered that highest and hardest glass ceiling, but someday someone will — and hopefully sooner than we might think right now.

And to all of the little girls who are watching this, never doubt that you are valuable and powerful and deserving of every chance and opportunity in the world to pursue and achieve your own dreams.

The loss of Clinton and Kaine as possible leaders of this country are even more keenly felt after their emotional, thoughtful concession speeches. But Kaine (and Faulkner) are right;

They've killed us, but they ain't whooped us yet.