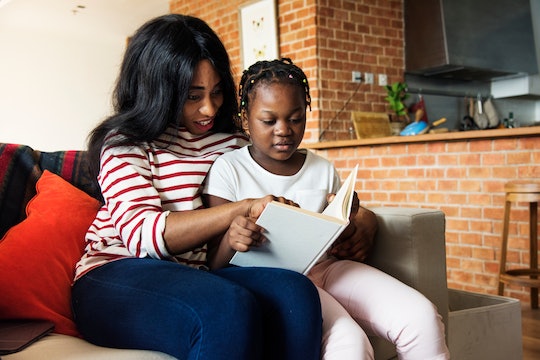 If Time Out Isn't Working For You, Maybe What Your Kid Really Needs Is Time In

When I was little, I spent quite a lot of my days on the middle of the floor, in time out. It got to the point where all my MawMaw had to do was point downward, and off I slunk to my spot of shame. It never changed my behavior, or made me think, but it did confine me, and prevent further upheaval for a period of time. Psychology is just beginning to understand why this wasn't a successful tactic in changing behavior, and recent research favors new approaches: Time in is the new time out, and it becomes more intriguing the more you intuit the concept.

The idea behind isolating children who behave badly isn't a new one. Generations of adults have been utilizing this method of discipline for as long as there have been children. Think of old movies with kids wearing dunce caps in the back of the classroom, or perhaps your own memories of being forced to stand with your nose in a corner if you misbehaved in class. It's only recently that psychologists began questioning why the root behaviors weren't changing with the punitive measures taken, and how they should be adapting the reaction to the behavior to the needs of the child, as Psychology Today reported.

Child therapist Bonnie Compton told The Washington Post that the logic behind time outs is flawed and that “There is loss of contact, which can also be interpreted as loss of a parent’s love, especially for younger children." For many of us who were taught to believe in this method, this is a hard pill to swallow, because we know we love our children, and it's hard for us to imagine our children not understanding that we're putting them in time out because we love them. "Kids who are sent to their room often believe their isolation is a result of being bad enough that parents do not want to be around them," Compton continued.

Experts are now suggesting that we change how we relate our displeasure to our children in a way that helps them identify the problem and work through it. Coined "time in," according to the Post, it is the method by which you pause and speak to your child, engaging them in conversation. Psychologist Mary C. Lamia Ph.D. wrote in Psychology Today that time in is all about calm redirection and assisting your child in learning how to soothe themselves and creating a dialogue about the behavior. "We learn through our connection with significant others in our life, and through this connection our value is recognized along with the appraisal and understanding of behavior that negatively impacts the other," she explained.

The divide between what parents think children understand and what children actually do understand is why "time in" a better choice. It's because of this gap that behaviors weren't changing with time outs, as pediatrician Nadia Sabri, M.D., stated in the Post piece: "Kids don’t have the advanced cognitive skills to think abstractly," she explained. "Emotional modulation and regulation occurs with development of the prefrontal cortex, the part of the brain which doesn’t fully develop until adolescence." Meanwhile, children's emotional cognition is also developing. So essentially, what little ones learn from time out is that adults will use emotional manipulation and withhold affection if they don't behave perfectly. It's a lose/lose.

Dr. Sabri suggested that parents bring themselves down to the level of their children and truly engage with them, talking about their behavior and why it's inappropriate. This lays the framework for children to learn not only what is and is not alright, but also how to self-soothe and calm down in a fraught situation. However, time outs aren't completely left for dead in this new parenting frontier. The American Academy of Pediatrics (AAP) wrote that sometimes children become too upset, too overwhelmed and they need to be removed from the environment. At that time, it's best to move your child, and reassure them by giving them only as much space as they need to calm down.

It's a new world out there for parents, but our children will be the better for it.