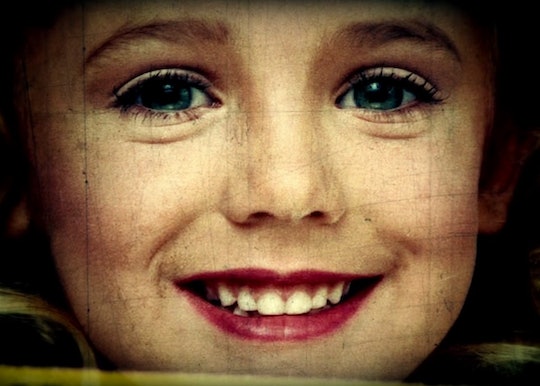 Even 20 years after it happened, the murder of a 6-year-old beauty pageant queen in her family's Boulder, Colorado, home still floors investigators and revs up conspiracy theorists. As CBS prepares to air The Case of: JonBenét Ramsey, its three-part docu-series about the long-unsolved crime, authorities and those who knew JonBenét and her affluent family are grappling with the effects of what has been a tumultuous two decades of anguish, suspicions, fear, and speculation, as the young girl's parents consistently denied any involvement in her mysterious, violent death. So far, a timeline of JonBenét Ramsey's murder and its harrowing aftermath has not aided in identifying the perpetrator — rather, it has served as Exhibit A of just how confounding the case really is.

The Ramsey family's first introduction to what would become a horrible saga came early the morning after Christmas, 1996, when JonBenét's mother, Patsy Ramsey, discovered a handwritten ransom note on the staircase of the family's home. "At this time, we have your daughter in our possession," the note read in part. "She is safe and unharmed and if you want her to see 1997, you must follow our instructions to the letter."

The letter writer promised to call JonBenét's father, John Ramsey, to arrange to collect the $118,000 demanded of him for his daughter's return. The call never came, and later that day, after law enforcement officials had begun parading through the house, John found the 6-year-old's body in a windowless basement room.

That chilling, devastating development revealed some of what had happened to the child: She'd been both sexually assaulted and strangled, left alone with duct tape over her mouth and a cord twisted around her neck. At the time, though, and for a long time afterwards, it did very, very little to elucidate who had done this to her, and her family's suffering would be compounded because of it. Although they both publicly insisted that they had nothing to do with JonBenét's death, John and Patsy hired separate criminal lawyers and initially refused to submit to formal, taped police interviews, People reported in its original 1997 piece on the case. They, along with their then-9-year-old son, Burke, would remain suspects first with investigators and then, for much longer, with the public.

Romper reached out to the Ramsey family's representation but did not hear back at the time of publication.

The family's status among amateur sleuths as Possible Perpetrators would endure even after October 1999, when a grand jury convened to hear evidence in the case and, still, no one was arrested. (Later, in 2013, newly unsealed documents showed that the grand jury had recommended charges be filed against John and Patsy, but that prosecutors had declined to do so because of lack of evidence. The couple was never convicted of any crime in relation to their daughter's tragic death.)

But new evidence did continue to emerge, and it worked to exonerate the Ramsey family. In 2003, with the advent of DNA testing, investigators confirmed that a blood spot discovered on JonBenét's underwear belonged to an unidentified male, even though there were never any signs of a break-in at the house. Nearly three years later, in August 2006, an American schoolteacher named John Mark Karr confessed to the killing and was arrested in Bangkok, Thailand — but his DNA did not match and his his story did not add up (he likely wasn't even in Colorado at the time of the murder, according to ABC News), so he ultimately went free, and the case remains unsolved.

Just a few months earlier, in June 2006, Patsy Ramsey had died of ovarian cancer. She did not live to see the day when, in July 2008, head of the Boulder County District Attorney's Office Mary Lacy publicized a letter she had written to the Ramseys clearing them of official suspicion. In addition to expressing the hope that one day a DNA match would lead to the solving of the crime, it read, in part:

No innocent person should have to endure such an extensive trial in the court of public opinion, especially when public officials have not had sufficient evidence to initiate a trial in a court of law. I have the greatest respect for the way you and your family have handled this adversity.

Throughout their ongoing ordeal, the Ramsey family has maintained that an intruder murdered JonBenét. There's certainly no guarantee that the CBS docu-series will solve the mystery, although it will likely captivate audiences the way long form, true crime reporting endeavors like Making a Murderer, Serial, and O.J.: Made in America did before it.

When it premieres Sept. 18, the legions of true crime aficionados who will inevitably adopt that goal as their own need to remember that at the center of the case is a real family that's suffered for decades, and a real little girl who was undoubtedly terrified in those unknown moments or maybe even hours before her death.