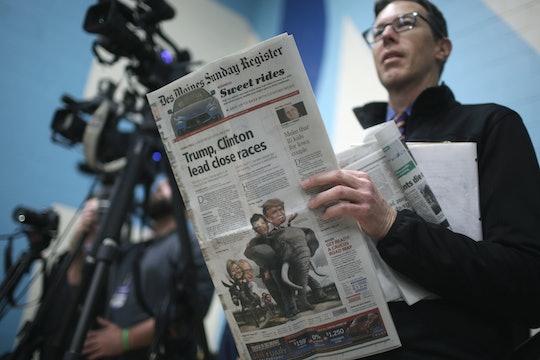 Times The Iowa Caucus Did Not Predict The Presidential Nominations

No matter what candidate you’re supporting, today’s Iowa caucuses are a big deal. The first of many caucuses, tonight will give hopeful candidates — and their respective supporters — insight into just how well they’ve really been received. But although they've has acted as a litmus test of a political party's direction time and time again, there have been a good number of times that the Iowa caucus didn’t predict the presidential nominee.

The Hawkeye State will have the nation’s attention on Monday night, as Iowans will make their voices heard. Being the first to do so carries a ton of pressure, as they’ll set the tone for the rest of the election season. It is important to note that the Iowa caucus have been accurate in foretelling who a party’s nominee would be on at least a handful of occasions. However, as ABC News reported, that success rate does tend to vary from party to party.

While Vermont Senator and frontrunner Bernie Sanders called tonight’s event a “toss-up,” for Democrats, the Iowa caucuses have been pretty good at predicting their party’s presidential candidate. Since 1976, the winner of the caucus clinched the party’s nomination all but two times. Those exceptions occurred in 1988 when Missouri Rep. Richard Gephardt won the Iowa caucus but failed to gain the nomination, and four years later in 1992, when Iowa Senator Tom Harkin experienced the same fate.

But Republicans should put little credence in the results. In fact, a GOP nominee should be concerned if the Iowa caucuses work out in their favor. According to ABC News, only once since 1980 has an Iowa victor became the presidential nominee. (And yes, it was George W. Bush in 2000.) So, if The Donald wants to win come fall, supporters had better hope that Trump’s confidence about the Iowa caucus can carry him through the remainder of primary season.

"The importance of Iowa is enshrined in tradition. It's not practical," Jason Johnson, a political science and communication professor at Hiram College in Ohio told Al Jazeera last month. "[But] because it is the first, a large number of voters within the two parties and a large number of the press and party elites in [Washington] DC choose to make it an important contest."

As Johnson points out, most of the attention is put on Iowa and New Hampshire because it indicates how well a candidate has mobilized. Donors get an idea of how well a campaign has organized and can opt to pull or increase financial support accordingly. These results can mean sink or swim for a nominee's coffers during primary season, but other than that, they may not necessarily mean more than a few extra dollars in the bank.

Regardless of who comes out victorious tonight, the political season is far from over. So sit tight — nothing is set in stone at this point and we're sure to see some upsets and surprises over the upcoming weeks.