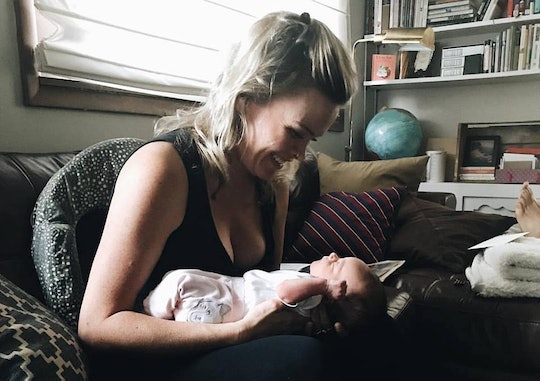 I survived seven weeks postpartum with my now 6-month-old baby girl, Melby, before I realized I was deep in a debilitating postpartum depression. I didn't recognize it at first, because, I told myself, I showered every day and the house was clean, so surely I was OK. But between my intently smile-filled visits with friends and family, as the day waned, so did my ability to hold it together. From dusk on, I cried blankly, endlessly, desperately clutching at some nameless thing no one could give me, until another day began. I had support — my husband was incredible — but I needed something more to get through the newborn phase.

I initially tried to plumb the hole with microbrews and protein bars (let's be honest: candy), but it occurred to me that perhaps alcohol and sugar wouldn't save me. And I was cared for. My husband stayed home from his job as a pilot for two full weeks; he held me while I cried; he was amazing with our daughter, but he also just could not relate to what was happening to me physically or emotionally.

I needed friends. Not just friends, like the kind you go out with to split a spinach artichoke dip and watch Mark Ruffalo movies, but "mom friends," as I said again and again. Other moms with brand-new babies and rogue limbic systems. Moms who were also pinging between emotions and struggling to find their way, because, while empathizing with someone's experience is certainly powerful, inhabiting it with them is something else entirely.

As it turns out, making friends when you're trying to make friends is about as casual as wishing you weren't the only single person on table nine at a wedding. I felt completely desperate as I talked to people at a local mom's group. Will you be my friend? I projected. You? I heard some girls I loosely knew planning a walk together, which sent me into a spiral of gloom, wondering what so mortally wrong with me that I wouldn't be invited (please see: postpartum depression). When another woman introduced herself as "Ann," I heard "And," and then offered, "A conjunction! That's an interesting name!" and then started stress sweating. I cried the whole way home for being so awkward, miles away from the bubbly, affable self I remembered.

And then, a miracle.

I kept saying I was lonely. It was the only word that made sense to me at the time, but in retrospect, I understand that I was stranded in a chasm between my old identity and new identity as a mother. I felt untethered. My body was recovering from growing and ejecting an entire human life in the course of less than a year, I had quit my job in order to stay home with my daughter, and the only feedback I was getting from my new boss was hysterical tears or deathly silence. I had no concept of who or why I was, and was left reeling by this unfamiliar infant and the relatively traumatic process of her delivery.

Every time someone would ask, with hope and reverence in their eyes, how much I loved being a mother, how many hours I spent gazing at my daughter, I'd muster a diplomatic response about how "we're figuring each other out," because it was true, but felt much milder than the “I'm pretty sure I made a mistake” that was screaming throughout my entire mushy body.

And then, a miracle. Pretty much exactly one year prior, my mom had sent me a Christmas gift — one of those luxe fuzzy throws from Pottery Barn that cost a million dollars — in the mail, except instead of sending it to our actual address at 1512, she sent it up the street to 1412. Through some convergence of small world connections and social media, Amy, the accidental recipient of my Christmas blanket, learned I was the rightful owner and delivered it to my door.

One year later, having still never actually met, we connected via Instagram. I learned my blanket fairy was also a stay-at-home mom with a then-15-month-old with a hilarious disposition and a penchant for over-accessorizing, and another little girl on the way.

Part of my processing the very real identity shift of becoming a mother was external. I took the requisite pictures of my baby girl and posted them to social media, but also shared my turmoil at feeling like who or what I was was never enough. One day, after a particularly vulnerable post, Amy commented, "I love this and you for sharing the things many of us have in our head but are without the right person or outlet to say ourselves. These days are tough. You're doing great, mama."

Those supportive words were a gateway — they led into her request for my prenatal yoga tips and mine request for her "healthy" chocolate chip muffin recipe. Simple things, small things. Talking to her just felt easy. I felt like she understood.

When I took Melby for walks, I'd strut by Amy's house, being sure to exude an extra bit of confidence and ease, thinking maybe she'd peer out and see me and think "I definitely want to go on walks with that girl who seems like a great time and not at all desperate." We took a ridiculously long time to meet in person. I felt anxious about it, because I really, really wanted this person to be my friend. It felt too good to be true.

It turns out it wasn't. One random Wednesday, we went for hamburgers. I drank a beer. She didn't judge me. She said she would have had a beer at 11:30 a.m. too if she wasn't, you know, pregnant. She laughed at my almost-jokes. Suddenly, we were not only real friends, but mom friends.

Motherhood can be really lonely. For me, it wasn't for lack of support, visitors, or resources. I just really needed someone to know exactly how I felt.

Fast forward four months, we talk every day. Usually, we text, because we've mutually agreed that phone calls often feel like a personal assault as they often occur at some chaotic, nap-desperate, topless, hysterical, or otherwise totally inconvenient moment. We talk about sleep, poop, baby food, adult food, exercise, not actually exercising but just thinking about exercise, theoretical tropical vacations, clothes, and most importantly, we identify with each other's feeling that staying home is the most important thing for us personally, that it is filled with joy and intimacy and growth and is all concurrently sometimes the most mind-numbing, exhausting thing in the world.

Motherhood can be really lonely. For me, it wasn't for lack of support, visitors, or resources. I just really needed someone to know exactly how I felt, because she was feeling it too, and say, I feel you. I'm with you.

My mom lives across the country and wasn't able to be here when my daughter was born, but little did she know, she inadvertently delivered just exactly what I needed through a blanket sent to a stranger's door. I take it as proof that, even though we might feel like we don't know what we're doing, a mother always knows, somehow. I believe it, fundamentally, but thankfully, when I forget, I have my mom friend to remind me.