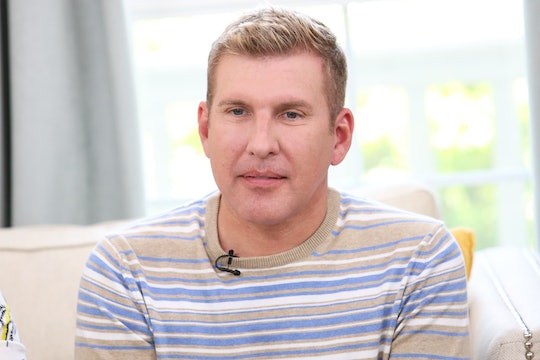 Protestors around the country are denouncing racism on the streets and one Chrisley Knows Best reality star is shutting it down on social media. After someone left a racist comment about his granddaughter, Todd Chrisley called out "ignorance" and "hate" in a response that made it clear he won't stand for racism, especially when it's targeted at his family.

This week, the Chrisley Knows Best reality star shared a selfie he took with his 7-year-old granddaughter, Chloe Chrisley. Chloe is the young daughter of Todd Chrisley's son Kyle, but she has been raised by Todd and his wife Julie Chrisley since 2014 due to Kyle's struggles with substance abuse, according to E! News. In the caption of the selfie, Chrisley was announcing that Chloe would be his guest on his podcast Chrisley Confessions, where he planned to have a conversation about racism.

"Silent Racism, I Love How God Made Me, and It’s Enough," he wrote on Instagram. "Today I am joined by surprise guest Chloe for a conversation about race and racism in America. Plus your questions about how the show affects regular life."

Many people who saw the photo of Chrisley with his granddaughter, who is biracial, thought it was lovely. "Todd my boo! You got this," one fan commented. "Chloe is well grounded and blessed. She will always know where she comes from and who she is. You and Julie are sooooo dope." Another wrote, "Absolutely beautiful! I love you guys!"

Unfortunately, one person decided to make a disgusting comment on their sweet photo. "Im sorry I don't like it marry your own color it really screws up the kids," the Instagram user commented.

Chrisley, rather than (justifiably) losing his temper, instead replied with grace. "Hello Patti, I hope that the lord lets you live long enough to see that color doesn't screw kids up, but ignorance and hate most certainly will," he replied. "I will pray that God tempers your heart and that he grants you clarity."

At the end of May, Savannah Chrisley had opened up in an Instagram post about her concerns for her niece, admitting that the real issues of racism in America worried her. "My dad and I sat and had a lengthy conversation about it and we were heartbroken and scared for Chloe's future," she wrote in a post in response to the protests that erupted following the police-involved killing of George Floyd. "We live in a world to where we have to teach her to EXTRA cautious around police officers because the color of her skin... IT HAS TO STOP."

During his chat with Chloe on Chrisley Confessions, the proud grandfather said it was important for his 7-year-old granddaughter to be "involved in these conversations" about racism and said that he's had to open his eyes "in a lot of ways to silent racism."

Whether it's in the streets, at work, or on social media, speaking out against racism is one important way to take a stand and confront this real issue head on.