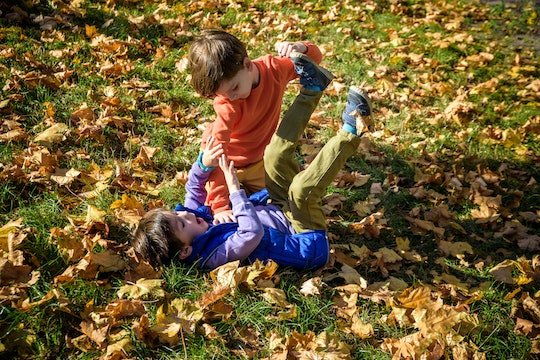 I once had a friend tell me that trying to raise two toddler boys was like raising a pair of brawling tiger cubs. She estimated she spent roughly 60% of her time pulling the kids apart. But what is it with these little 3-year-old UFC wannabes? Why are toddler brothers always fighting with each other?

I reached out to Dr. Mona Delahooke, a clinical psychologist with more than 30 years experience working with kids. She says that, firstly, it’s important to define what constitutes fighting: "Toddlers — and especially toddler brothers — engage in rough and tumble play that might be loud or aggressive at times, but we wouldn’t really consider it fighting," says Delahooke. "Play is the natural language of childhood and it helps children manage their feelings."

So sometimes, what might look like the toddler version of a barroom brawl — complete with a (baby) bottle being clonked over someone's head — might actually just be the kids roughhousing, or working through emotions they don't yet have the language for.

But OK, yes, sometimes the kids really are battling. But it isn't necessarily something to freak out about. As Delahooke says, "Sometimes the play will go south and end up in more of an altercation, often related to competition. But we should expect this as a part of development with one’s siblings."

I grew up with a million brothers, and I can attest to this being true. My siblings were constantly battling it out, well beyond their toddler years. Walking through the house, there always seemed to be tangle of fighting bodies rolling past — like those cartoon fights that move past like dustballs with just random arms and legs shooting out at various moments. And this isn't to say I stood quietly by playing tea party with my dollies. I was engaged in quite a few rolling-dustball-dustups myself. It was simply the way of sibling life. Until we got older, of course, and learned to use our words to better communicate our emotions, via helpful phrases like: "Get away from my CD player you stupid dork!"

If you're concerned about your toddlers fighting (or just generally fed up with it), Delahooke suggests helping them learn to identify what they're feeling. "Model using words for strong feelings for children. If you are witnessing your toddlers begin to argue, a short comment such as 'It seems like you are having big feelings right now, and maybe you can tell your brother about it.' This may be enough to avert a fight and turn it into an experience of communication."

Watching your kids fight can of course be unsettling, but Delahooke does encourage us all to chill a little bit, saying that she thinks "mothers in particular need to develop a stronger tolerance for their children’s negative emotions and expected aggressive themes in play." She reminds us that aggression isn't something to fear, it's simply another part of being human. "Aggression is just as important an emotion as nurturing in children’s play, but we’re often afraid of it because we fear that children will end up too aggressive. On the contrary, the more robust play — within the healthy range of negative and positive emotions — that a child has, the more he will be able to master big emotions in real life."