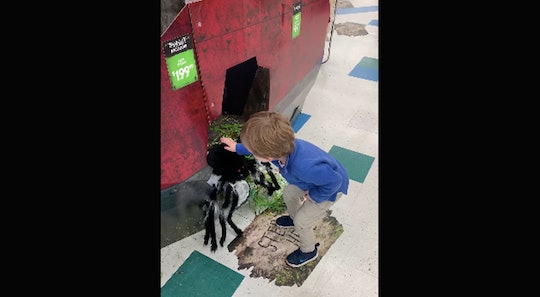 When my sons were small, one of their greatest dreams was to be bitten by a spider. Not just any spider, obviously, just a radio-active spider who could fill their veins with special web-slinging powers. Their utter adoration of Spider-Man far outweighed their fear of spiders. Apparently, however, this is not true of all children. Some of them are going to throw down if any spider ever comes at them, and their courage deserves a little respect. Like this toddler who fought an animatronic Halloween spider just for lightly spooking him. He was not having any of that spider's nonsense, radio-active or otherwise.

Facebook user and dadFrank McCormick was just hanging out on Sunday with his 3-year-old son Charlie, catching up on a little shopping. Of course, it is currently October and we all know this is the month of spooky Halloween decor in stores. Why, just the other day I was at the supermarket walking through the produce section when a witch statue came to life cackling at me. It was very disturbing, obviously. But my reaction was to roll my eyes at no one and continue on to the carrots section. I am not quite as committed to defending myself from Halloween decor as Charlie, it seems. He was going all in, as evidenced by the video his dad shared on Facebook over the weekend.

In the video, which has been viewed more than 24 million times since McCormick initially posted on Sunday, Charlie approaches a cardboard spider lair on display at Michigan Spirit Halloween, as per NBC 25, where there is a docile-looking (but also huge in comparison to a 3-year-old) spider laying dormant. Charlie approaches the spider, who springs to life and scares the heck out of the toddler.

This was an ill-advised decision on the part of the animatronic spider. Charlie jumps away at first, but then comes at the spider, fists flying, and attempts to rip it off its plastic spring. His dad tries to pull him away, telling him it's OK, but Charlie keeps on going back for more. He even says, straight-faced as a judge, "I want to hit him." Even as his parents walk away with him, he is struggling to get back to the spider, presumably to end its reign of terror.

Halloween decor be warned, Charlie did not come here to play.

Let's be honest, though: fighting spiders of any sort really takes it out of a person. Which is why the next post from McCormick is Charlie passed out asleep beside his cat, who we can only assume has been charged with guarding his master in case of a midnight spider sneak attack. As one Facebook user wisely commented:

After beating a** all day, Charlie can finally get some sleep. Rest well, young grasshopper.

As we all get ready to fully invest in what is arguably one of the best seasons in North America, Halloween, perhaps it's a good idea to view Charlie's little tussle with that spider as a cautionary tale. That's because if you are one of those people who like to jump out at strangers and scare them, you might want to make sure they don't have Charlie's instincts. You just never know.