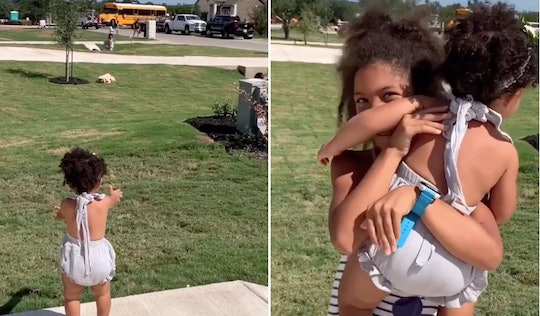 When you have more than one kid, it's obviously a bit of a struggle sometimes. You worry your love is going to be spread too thin, that you just won't have enough time for each of your little people, that there's simply not enough of you to go around. But here's the thing, you're not the only one doling out the love. You have given your kids something remarkable and fierce and precious besides yourself: siblings. It's not always easy with siblings, of course, but when you manage to get it right it's a thing of beauty. Like this toddler greeting her sister after school as part of a joyful daily ritual. This is the kind of specific love you only get from your sibling, and it's always worth celebrating.

Jennifer Borget is a mom of three sweet kids in Austin, Texas: 9-year-old daughter Jayda; 6-year-old son Tyree; and 15-month-old daughter Aliyah. Borget tells Romper her youngest daughter Aliyah is a big fan of her older siblings and in the past few weeks, she's begun to recognize that the big yellow school bus coming around in the afternoon means her two playmates are coming home. And now the little girl has started a ritual: When the school bus doors open, she runs to greet both her big brother and big sister with squeals of joy and open arms.

Last week, Borget shared a video of the heartwarming moment after watching it happen for a few weeks, so get ready to feel better about the world in general.

In the video, which Borget captioned "the best part of my day," Aliyah sees big sister Jayda first. She starts to make happy little sounds of recognition and toddles over to meet her big sister, who is running across the grass to meet her. Jayda scoops Aliyah up into her arms and the smile she gives her mom says it all. She's simply happy to be home with her little sister.

Borget tells Romper that Jayda has always loved being a big sister. "She was ecstatic when she found out she was having a sister and she just loves to get home and play with her. Sometimes she likes to change her outfit like she’s her own little doll," she says.

More than 3.8 million people have watched this video since Borget first posted it on Thursday, a fact that has sort of overwhelmed the family. And the proud mom tells Romper that she initially posted it as a "personal, family home video that I figured no one would watch," but she is so pleased with the "overwhelmingly positive" response the video has received.

And she's not the only one; Borget told Jayda the video had gone viral when it hit 1 million views and perhaps most importantly, as her mom says, "some of the kids at cheer practice told her they saw it and that made her really happy."

As for Tyree, he happened to be slightly slower getting off the bus that day, but Borget tells Romper he enjoys the same effusive greeting from his little sister at the end of a long day at school.

Borget says that she has worked hard to encourage her kids to establish a sibling bond over the years. "I tend to encourage them to spend time together. If they’re watching a movie or have a device we do it together instead of doing those things separately," she tells Romper. "We have family movie night together and the kids love that."

At the end of the day, your kids are going to make their own decisions about their relationships with each other. Here's hoping they choose to be as excited to see one another as Jayda, Aliyah, and Tyree are after just a few hours apart. That's real love.