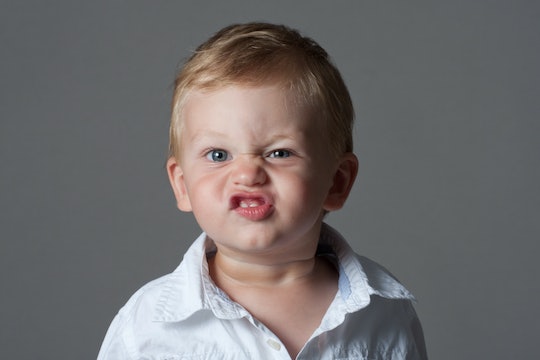 Your Toddler Definitely Isn't The Only One Swearing At Daycare, New Survey Finds

Have you ever heard a toddler swear? It's sort of like seeing a dog riding a skateboard or something; you know it's not natural, but it's utterly mesmerizing. Although that being said, if I had ever heard one of my own toddlers swear, I would have probably been pretty dismayed, especially because I would have worried about where they heard the bad language. Not to mention in what sort of context. So when a new survey of nursery schools found that toddlers are swearing more than you might think, I actually understand why parents would be concerned. And I wouldn't laugh if I heard said toddlers swearing — I promise.

A new survey conducted in the United Kingdom by Day Nurseries UK found that around 12 percent of nursery school staff — equivalent to one in 10 — often overheard toddlers swearing, as TODAY reported. (And now please imagine toddlers swearing with British accents and from here on in I will take this more seriously).

Around 13 percent of the 1,125 staff members who responded to the survey also noted that they have heard toddlers swear more often than currently than they once did, as The Sun reported, which could mean several things. Kids could be hearing more swearing at home, of course, or they could be hearing it elsewhere.

As Sue Lerner, editor of Day Nurseries, told Metro, she thinks the issue could stem from a more relaxed social attitude towards swearing. "These findings are not a surprise as swearing seems to have become more socially acceptable, and if young children do not hear it at home, they can hear it in pop songs or on YouTube," she told the publication.

Children are more exposed to a wide range of potential external factors that could influence them in 2018, but should parents be worried if they catch their kids swearing? Lerner explained in an article for Day Nurseries UK of the findings that it could be cause for concern.

"Despite it becoming more prevalent in society, it is still shocking and incongruous to hear profanities coming from the lips of a young child," Lerner wrote. "There is a real power to swearing and when a small, seemingly innocent child swears, the words have even more resonance."

A different study shared in Psychology Today noted that it isn't the actual curse word that is the real issue; instead, it's the intention behind the swearing or the heightened emotion that might be causing the verbal outburst. And context matters; if a toddler is using a swear word that in no way makes sense to the situation, perhaps it's not the worst thing in the world. But if a toddler is using swear words to be verbally abusive or to communicate something violent, maybe that's not the best use of their growing language skills.

In all seriousness, toddlers shouldn't be swearing. It could potentially create a hostile environment for care providers and other children. It's also obviously not the best way for little ones to learn. But perhaps if a kid accidentally lets a curse word they don't understand slip out every now and again, the best way to deal with it is to just brush it off.

And for Pete's sake, don't laugh. As someone who struggles with that, I know it only makes it worse.