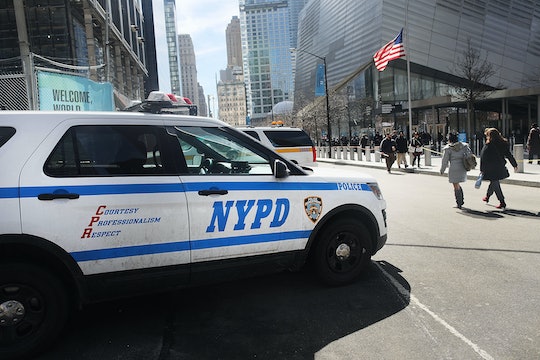 Toddlers Get Stopped By Police In Their Toy Car

It's a sound every driver out there dreads; the persistent whine of a police car siren. Pulling you over for a citation. Nobody wants to deal with that. Well, almost nobody. These toddlers got stopped by the police in their toy car, and honestly? They seemed like they were down with it.

Twin toddlers Evan and Aaron were out enjoying a leisurely drive through New York City. You know how it is; sometimes you just want to fire up the old Range Rover and take it for a spin. There's only one problem with this picture: Aaron and Evan don't appear to have car insurance, and they missed the age restriction for having a driver's license in the state of New York by approximately 14 years. Despite their multiple infractions (did I mention they were also driving on the sidewalk?), the 2-year-old twins were cool customers when they were approached in the neighborhood of Washington Heights by two uniformed NYPD officers. Their father Alex, who took video of the exchange and shared it on his Instagram, can be heard saying, "Uh oh... " and yet the twins were still holding it together when the cruiser rolled up beside them with lights flashing.

When the officer approached "the vehicle," a black tiny Range Rover that is actually cooler than my own adult car, the toddlers seem to take him pretty seriously. As their dad jokingly calls out from behind, "License and registration," the two officers point out to the pint-sized drivers that their rear lights don't seem to be working. The twin in the passenger seat rummages around in the glove box, ostensibly to look for their license and registration, while his brother rests his head on the steering wheel with a sort of world-weary frustration. Like, not this again. We've all been there, kid.

The little driver is handed a ticket, and pays it immediately with happy high fives all around. The officers seemed eager to accept the payment, and now I'm wondering if that might work the next time I get pulled over.

I wish this kind of thing happened every day. NYPD officers quasi-goofing off with little kids. Dads taking their toddlers for a walk and clearly just having a ball. I love everything about it; although part of me wonders what those toddlers said to each other later that night about the experience. I'm picturing the little guy in the passenger seat admonishing his brother: "I TOLD you that you were driving too fast. Next time I'm driving."