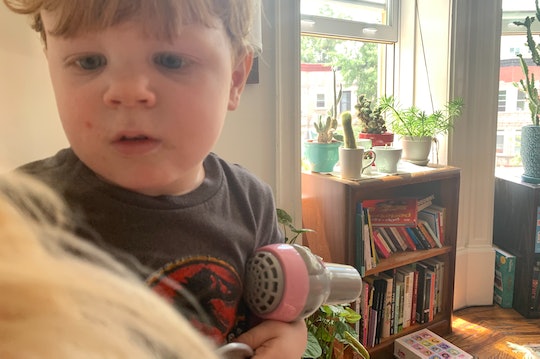 Toddlers Who Think They Are Hairdressers Are Smarter Than You Think

Sometimes I go through the whole haircut thing just for the moment in the beginning where the hair stylist plays with your hair as you discuss The Inspiration. Now that I have toddlers who love nothing better than cracking out the stylist tools, I get free hair-mussing any time. My daughter will brush my hair with one of those baby-soft white-bristled brushes made for dolls, or try for five minutes to gather my hair into a ponytail, dropping and regathering strands with her pudgy little hands — it's a practice that amounts to a swarm of fairies playing with your hair, and would easily cost $300 a service if she had a chair in a Manhattan salon.

She also likes to zig-zag Lego pieces across my skull, and sometimes to "cut" my hair with a plastic drill. We own a toy Dyson hair dryer, which comes in a clear plastic suitcase that lends a serious f*cking air of importance to my daughter marching out of her room intent on giving you a "haircut." For the first year, she held it backwards, and could not be convinced that the pointy end was the one you dry the hair with.

My daughter isn't a perfect hairdresser — she'll make me put in my own hair elastics, and stab me with open barrettes — but compared to her brother, she's Vidal Bloody Sassoon. My 2-year-old son is also passionate about hair, and the risk/reward calculus is a knife edge between ASMR and instant hair loss. He has pioneered a move I'll call the "tongs," in which he simultaneously brushes your hair above and below with two brushes, potentially unsheathing double the hair from your scalp in the process. "No!" he'll tell you as he tears hair out by the root, "not like that!"

But then sometimes it is lovely.

Haircuts have been a major plot point in two recent pop culture phenomena — "I look like a pencil!" Fleabag's sister Claire screams from beneath a fierce Scandinavian bob in Fleabag's second season. In Fleishman Is In Trouble, Taffy Brodesser-Akner's debut novel, a hasty haircut is a sign that a mental breakdown is underway. Haircuts are a testament to hope, and a sign of despair. "Hair is everything" hisses Fleabag at the hairdresser.

I was uncommonly sad about my daughter's first haircut — it felt like the first time I had to acknowledge that something had changed irrevocably, then lop that thing off and watch it be swept into a dustbin. We got the haircut because she had grown a mullet. The salon offered a "first haircut" special that cost $30, came with a "certificate," and preserved a chunk of hair in a baggie that I lost somewhere between the salon and Starbucks. Goodbye, infancy!

It has always been vaguely traumatic getting my son through a haircut: he will sit crying in a yellow taxicab watching PJ Masks as his carefree curls are snipped out of his eyes and he emerges a different child. A goddamn tragedy.

The grooming is, of course, one of those primate things. We do it, scientists say, to bond, to establish altruism, to gain and enforce social rank. It also feels nice.

"A study on female Japanese Macaques (Macaca Fuscata) indicates that grooming individuals may use soliciting postures (after a certain time has passed) to signal the recipient that it's time for the groomer to be groomed," report David Krueger and Lanlan Jin for Reed University. If I was a macaque I would spend all day at the salon.

Hair-twirling is a well-documented self-soothing behavior among toddlers, while a paper in the Journal of Developmental and Behavioral Pediatrics previously documented a toddler obsessed with stealing and eating other children's hair ("With gentle persuasion, he eventually removed his thumb and agreed to throw the hair in the trash. He did not appear distressed.")

Our toddlers learn to groom their hair by watching us, as Daily Montessori points out in an activity "idea" for a parent to set up hair brushes in a child-accessible container, then stand in front of the mirror brushing their own hair. ("Please send some other important activities," commented user aashish with shade that wouldn't look out of place on a glowering hair model from the '80s.)

We are teaching our kids how to care for themselves when we teach them how to brush. We are relaxing them, and also ensuring they don't have a mullet.

Jerry Seinfeld once pointed out the hypocrisy of loving to touch hair on a person's head, and freaking out the moment it is detached and shows up in, say, your pasta. When we sweep up the snippings of hair from my son, sitting forlornly in the living room with an ice cream cone and a new haircut, I'm mostly just amazed. How fast this is going! How much hair the Manley genes have conferred! ("Wow, you have a lot of hair," every hairdresser I have ever met has commented. "It's not a wig!" noted a vagrant who once grabbed a handful of my hair and tried to make off with it in the West Village.)

The other day I was lucky enough to have both my kids attempting to do my hair at the same time, a mix of relaxing tingles and painful tugs. I braid my 4-year-old's hair most days now, per her requests, and she has gotten better at not pillaging hair while brushing. My son is still terrible at it, but his face while he concentrates on the job, trying to do a good turn of it, according to whatever mysterious ideas he has about hairstyling — there is hardly a better sight. He's trying to do something he learned from me.

At the end, I have to swirl my hand around on the parquetry to pick up all the loose hair he has pried free. It's okay — hair always grows back.