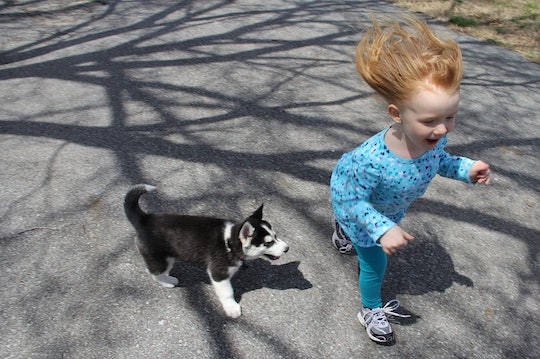 The University of Arizona recently conducted a study that found two-year-olds and puppies share similar social interaction habits. The researchers looked at dogs, toddlers, and chimpanzees to look for similarities in cognition. They conducted a variety of tests, both verbal and non-verbal, and assessed the way each group responded. In non-verbal situations, when researchers hid treats and toys and watched how each group went about finding them, they found that the puppies and toddlers responded in much the same way. Study lead author Evan MacLean, the director of the Arizona Canine Cognition Center at the University of Arizona, compared date from 522 dogs of different backgrounds (military explosive detection dos, service dogs, and pets) with chimpanzees studied in an widlife sanctuary in Africa and 105 two-year-olds who had already been studied going through similar testing. The study, which was published in the scientific journal Animal Behaviour, noted that toddlers and puppies both responded to social cues from the researchers like pointing, while the chimps did not respond to the social cues.

In an interview with Phys.Org, MacLean said that scientists have been researching how human development differs from the rest of the animal world, and the key could be social communication.

There's been a lot of research showing that you don't really find those same social skills in chimpanzees, but you do find them in dogs, so that suggested something superficially similar between dogs and kids. The bigger, deeper question we wanted to explore is if that really is a superficial similarity or if there is a distinct kind of social intelligence that we see in both species.

MacLaren's study noted that, while it is unclear whether dog and human cognition share a common structure, certain similar behaviors point to signs that the two species could have evolved through similar environments.

While it might seem like a revolutionary idea to study dogs in relation to human intelligence, it does make a kind of sense. After all, humans domesticated dogs centuries ago, and they are considered "man's best friend", right?

And if you've ever tried to deal with a puppy and a toddler simultaneously, you can definitely attest to their similarities. They both seem to enjoy putting everything in their mouth, rambunctious play, and loving their people to the point of weeping exhaustion. How did we never see this before?