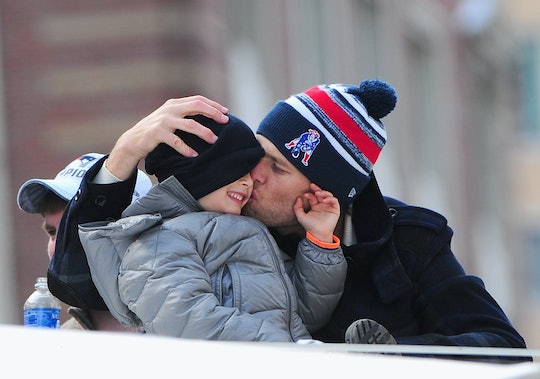 Tom Brady is arguably one of the best known football players of his generation (even I've heard of the New England Patriots quarterback, so that's saying something), and he has built his entire career on sports. Of course, there are other things in Brady's life beyond sports, namely his wife Gisele, and his three children. And although some might assume his kids are following in his footsteps, it turns out Tom Brady's youngest son didn't like sports. The realization was tough for Brady at first, but he ultimately handled it in the best way possible, choosing to love his son for who he is.

In an article for Men's Health magazine published Tuesday, the athlete opened up about his beloved kiddos, noting how his oldest son, Jack, is a big sports fan. As for Benjamin? He isn't into athletics at all. And the famous quarterback admitted that this genuinely bothered him for a long time. He explained that Jack tends to be a lot like he was as a kid, trying "hard, never wants to disappoint dad," but Benjamin? He likes "other things."

It can be difficult for parents to come to terms with the fact that their children are their own people and not younger versions of themselves. It's tough on the parents, sure, but it can also be tough on kids who are trying to live up to unrealistic expectations.

As Brady explained in his interview, he tried to encourage Benjamin to try sports at first, stating, according to People: "I was like, ‘C’mon, let’s do this.’ And he was like, ‘Nope.’ And I was like, ‘What? No, do this!’

Eventually, it was his wife who helped him understand he was forcing gender stereotypes on his son. He recalled:

Gisele kept saying to me, 'Would you effing understand that your son is different?' It was hard for me. I was like, 'What do you mean? He's a boy; he should do all these things that I do.'

Instead of adhering to gender stereotype types (there's no such thing as boy or girl activities) Brady tried something new — he opted to see his son for the person he truly is. And that person sounds incredibly amazing, if you ask me.

Brady said that figuring out who his son is as a person has been pretty wonderful, saying, according to POPSUGAR Kids:

The reality is that Benny just likes different things. And it's great because now I just have to go do what he wants to do. When we do that, we have the best time. He's like, 'OMG, Dad, you're so funny.' He loves joking, and I joke back.

Aww. It sounds like Brady and "Benny" have a really sweet bond.

The takeaway here? Parents are imperfect, and sometimes it can be tough to get it right the first time. But the real test, the real moment of truth, comes when you sit back and try to see where you might have been wrong. And if you're ever having trouble finding your way, take a cue from Brady's book and choose love.