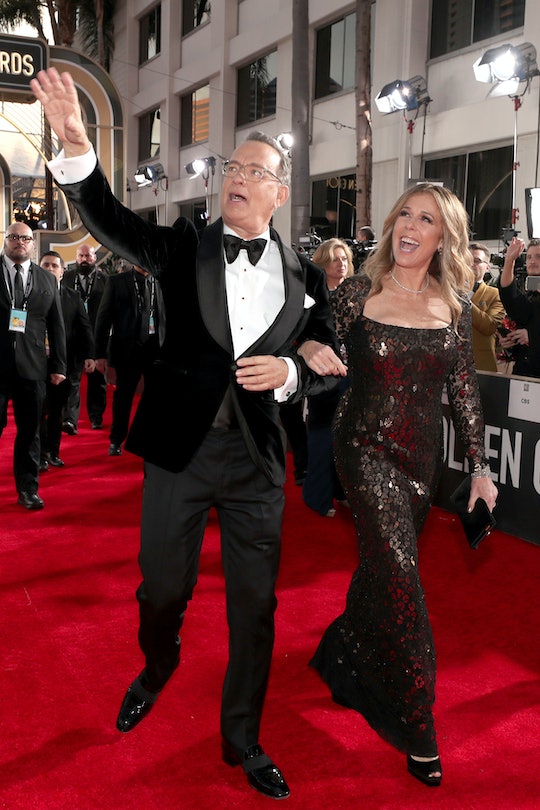 I've always felt a deep connection to Tom Hanks. I think a big part of it is that we share a birthday — July 9 — and also because he was such a huge part of my childhood. My favorite movies included Big, Forrest Gump, Apollo 13, That Thing You Do!, Toy Story — I could go on. But watching Tom Hanks cry about his family while accepting the Cecil B. Demille Award at the 2020 Golden Globes really solidified his emotional powers.

Obviously the award is a big deal — it's a lifetime achievement award meant to honor those who have made such a huge impact on the entertainment industry. If that doesn't perfectly describe Tom Hanks, nothing does, except for maybe perfect human being. And also, major family man.

Just a few moments after he accepted the award from Charlize Theron, Hanks got extremely choked up and turn away from the microphone to clap his hand over his mouth and apologize. And when he came back, he said, "A man is blessed with a family sitting down front like that." Cue all the waterworks, but they came even harder when the camera panned to his wife, Rita Wilson, and five children sitting at the table, looking up at him with so much love in their eyes.

"A wife who is fantastic in every way, who has taught me what love is. Five kids who are braver and stronger and wiser than their old man is," Hanks continued, proving that no matter what kind of career you have, no matter what awards you win or achievements you check off on a giant bucket list, at the end of the day, the best thing in the world is the family surrounding you.

Have I mentioned the connection I have with Tom Hanks? Here, I'll say it again — the moment he started this speech, I started sobbing. Because man, did he get it right. He has an incredible career that spans literal decades. He has made some of the biggest movies in the world, movies that made a direct impact on every person I've ever met, but he knows what's real. He knows that none of it matters without his sweet family, and using that moment up on the stage to bring that love to light, to let all of us into his true joy, was perfection. Every day, I look at my two little girls and my wonderful husband and I just know that nothing matters without them.

Hanks does, too. And while his award was well-deserved and I will forever be grateful for all of the movies and entertainment he's given me, if he also got an award for just Family Man, that'd be OK, too. It's the most important one, after all.