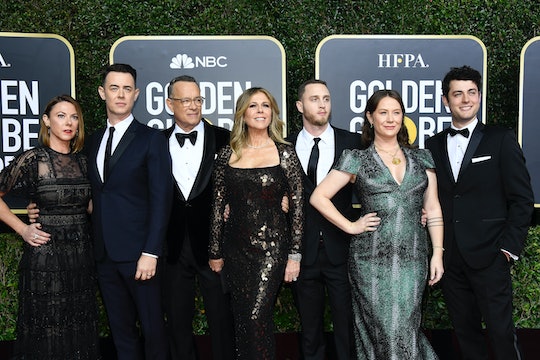 Tom Hanks Has Four Children, But Gave The Most Beautiful Shout-Out To "Five"

Tom Hanks really is the best of us humans. I'm certain there are plenty of people out there who are dying to get the dirt on the beloved actor, but I'm not one of them. Sometimes you just want to be able to believe in something, you know? And after Tom Hanks' gave a sweet shout-out to his "five" kids at the Golden Globes this year, I'm ready to fully embrace this actor as a symbol of all that is good, bright, and hopeful about our world.

On Jan. 5, Hanks won a Lifetime Achievement award for his decades-long career in Hollywood, the Cecil B. DeMile award. Like other actors before him, the award came with a fantastic clip reel highlighting his long career and a chance to deliver a speech. The It's A Beautiful Day In The Neighborhood actor got seriously, surprisingly emotional during his speech, which totally makes sense considering the award afforded him the opportunity to sit back and reflect on his incredible career.

But in peak Tom Hanks fashion, it wasn't his career that had him tearing up. It was his family. The actor got emotional when talking about his wife of 31 years, actress Rita Wilson. And even more weepy when he thanked his "five" kids, which was unusual since technically he only has four children.

During his Golden Globes speech Hanks said through tears, "A man is blessed with a family sitting down front like that. A wife who is fantastic in every way, who has taught me what love is. Five kids who are braver and stronger and wiser than their old man is."

So who is the actor's fifth child? Hanks has two children from his first marriage to Samantha Lewes, 42-year-old son Colin and 37-year-old Elizabeth, as well as 29-year-old son Chet and 25-year-old Truman with wife Rita Wilson. The fifth child Hanks mentions is actually his actor son Colin's wife, Samantha Bryant. A source close to the family told People that Hanks considers her to be "his daughter" since his son married her in 2010.

Holding a family together in Hollywood, especially when you are gone for long stretches as Tom Hanks mentioned in his speech, cannot be easy. But I suspect his unwavering love for every single member of his family makes all of the difference in the world. As he told the TODAY show the morning after the Golden Globes, "I was sitting there with my kids and my wife. They remember what they were doing when I was making those movies. They really are hallmarks. They’re chapters for all of our lives.”

Each new member adds a new chapter for Tom Hanks. And he's more than willing to make space for them. And that is why Tom Hanks is a remarkable human.